Viet Nam’s Environment Ministry takes first steps to improve national and cross-sectoral cooperation and seeks to improve the coordination of donor’s in the field of climate change policy.

Achieving the climate targets that Viet Nam has set itself under the Paris Agreement will require substantial efforts from the national government as well as international support. To ensure joint and concerted action, the Ministry of Natural Resources and Environment (MONRE), which is mandated by Viet Nam´s Prime Minister to serve as the focal point for the implementation of the Paris Agreement in Viet Nam, is determined to enhance cross-sectoral cooperation and donor coordination on climate change policy. The IKI-funded project "Support to Viet Nam for the Implementation of the Paris Agreement” supports the Vietnamese government in the NDC Review and Update process.

MONRE, together with other relevant stakeholders, has taken first steps in this process: 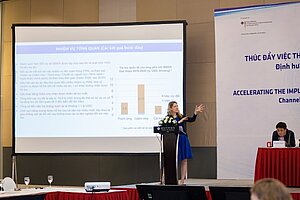 The monitoring framework consists of a set of indicators and corresponding reporting templates for annual reporting on the PIPA by sector ministries and sub-national governments. Further, a mapping of donor support for the implementation of PIPA was conducted. This mapping resulted in an extensive and searchable list with almost 600 records. It contains references to specific PIPA tasks for each project and indicates the amount of funding, the project lifetime, addressed (sub-)sector(s) and main objectives. This mapping served as the basis for a gap analysis implemented by the global NDC Partnership (NDC-P), which revealed additional need for PIPA support in some respects. In a letter directed towards the NDC-Partnership, MONRE has requested additional support from NDC-P members for these tasks and received positive feedback, in turn. Further talks about the operationalisation of this support will take place within the next weeks.

Additionally, GIZ together with MONRE is currently developing a web-based NDC Portal which will be the primary means of monitoring and information sharing. It will contain an internal component to serve as a channel for reporting on PIPA progress and serve public accountability towards achieving Viet Nam´s climate targets. Additionally, it will support coordination of national stakeholders and development partners that are supporting PIPA Tasks. Besides, it will inform policy dialogues. 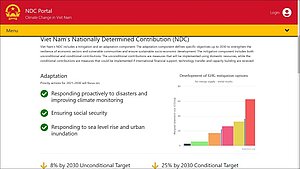 In parallel, debates regarding the design of a donor exchange forum are carried out. MONRE has introduced its initial vision of a “NDC Implementation Platform” which would bring together all national and international stakeholders working on the Paris Agreement in Viet Nam.

Preliminary results, such as the set of PIPA indicators, the donor support mapping, the gap analysis and a prototype of the NDC portal were introduced during an international workshop that was co-organised by the Ministry of Planning and Investment (MPI), the NDC Partnership, and the German Development Cooperation Agency GIZ, commissioned by Germany’s Federal Ministry for the Environment, Nature Conservation, and Nuclear Safety (BMU) in November 2018.