“CESTA Friends of the Earth” gets urban communities ready to sustainably address the consequences of climate change.

El Salvador is the smallest but most densely populated country in Central America. 300 kilometres of coastline, volcanoes and forests characterise its landscape and result in a wide climatic diversity.

The country is, though, severely affected by the consequences of climate change. Severe droughts destroy crops and cause forest fires, whilst strong hurricanes lead to destruction. In addition, progressive soil degradation and ongoing urbanization processes are increasingly threatening food quality and water supplies.

Non-governmental organisations such as “CESTA Friends of the Earth” have been active in the field of climate and biodiversity protection for many decades. In doing so, they have achieved important milestones, led by the introduction of several national Laws, namely the laws for the Promotion of Bicycles, for Inclusion of Persons with Disabilities in environmental work as well as the law to ban Metal Mining.

A sustainable future for El Salvador

CESTA (Salvadoran Center for Appropriate Technology) is one of the first organisations worldwide to increase their environmental impact with the support of the new IKI Small Grants programme of the Federal Environment Ministry (BMU). IKI small grants will thereby not only finance CESTA’s new project “Building capacities to reduce the impacts of climate change in urban areas near San Salvador" but also accompany the NGO in its ambition to grow and implement even more ambitious actions for a sustainable future through a customized capacity development strategy.

With its project start in May 2021 and over the course of two years, CESTA will work with various social groups, including religious communities as well as young environmental activists. Together, they aim to systematically and sustainably address environmental issues in three urban regions around the capital San Salvador focusing on jointly developed and concrete adaptation measures.

These measures include assisting small-scale farmers to efficiently increase seed biodiversity, organising educational programmes in schools to promote sustainable lifestyles and introducing local composting systems to counteract soil erosion. A key aspect of the project is its strong focus on gender equality. CESTA actively involves and strengthens women's organisations in the production of organic and local food to lead the transformation of agricultural practices. 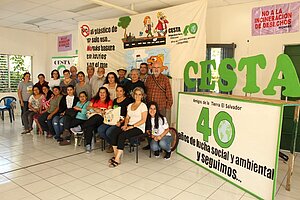 All project activities are based on a sound analysis of CESTA’s professional experiences and capacities. Strengths and weaknesses as well as potentials of the institution have been identified during a workshop in spring 2021, in order to fully utilize existing skills and to further develop over the course of the project. To achieve this, CESTA works in close cooperation with Deutsche Gesellschaft für Internationale Zusammenarbeit (GIZ) GmbH, which implements the IKI Small Grants programme on behalf of BMU. Setting up trainings on project development and management as well as environmental policy trainings in schools, and promoting youth involvement are only some of the various components of CESTA´s project in the next two years. Some of these trainings will be facilitated in cooperation with GIZ El Salvador.

As Ricardo Navarro, president of CESTA stated: “These working alliances with IKI will contribute to leading municipalities on the path to sustainability. They allow us not only to implement concrete solutions to existing problems, but also raise awareness about the need to protect the resources of Mother Nature, with the establishment of schools for political environmental training, incorporating especially young people and women.”

In addition to the practical improvements on the ground, the strong awareness-raising component of the project will contribute to increasing pressure on the legislative assembly to refocus on even more ambitious environmental laws.