25 IKI projects are presenting their results at a workshop in Vietnam and sharing experience on synergies and the NDC process in the country.

The first networking workshop for International Climate Initiative (IKI) projects in Hanoi took place on 31 October. Around 60 representatives from IKI projects, their Vietnamese partners and the German Ministry for the Environment came together for the workshop. The aims of the workshop were to identify potential synergies between the projects and to encourage the exchange of ideas on the priorities of climate policies and points of reference in relation to national NDC processes. Parallel to this, they shared experience gained during project implementation. 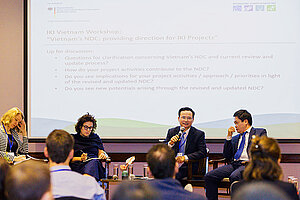 On the evening before the workshop an official reception was held for the “IKI Community” in Vietnam together with selected guests. Implementation organisations presented their IKI projects. In his words of welcome, Dr. Guido Hildner, the Ambassador of the Federal Republic of Germany, emphasised that the IKI's strong commitment in Vietnam since 2008 had made a contribution towards forging deeper relationships between Germany and Vietnam. He cited as an example the IKI's support regarding Vietnam's ratification of the Paris agreement and the concept of ecosystem-based adaptation, which has been applied in many regions of Vietnam thanks to the IKI and now forms part of national policy. The Deputy Minister of Natural Resources and the Environment in Vietnam, Le Cong Thanh, expressed his thanks for the successful cooperation with Germany and his hope that the cooperation between the two countries on climate protection and conserving biodiversity in Vietnam would be further strengthened in the future. 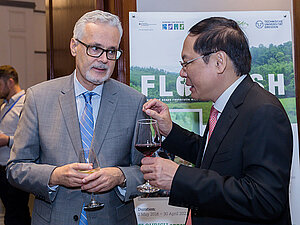 Vietnam is one of IKI's priority countries and currently has 31 bilateral, regional and global projects that are being delivered by more than 20 implementation organisations. The IKI has funded over 70 projects in Vietnam since it was established in 2008. An “IKI interface” was created in 2018 to coordinate the exchange and synergies between the different implementation organisations. This IKI Interface also organised the IKI reception and networking workshop. When the bilateral key project “Support for the implementation of the Paris agreement” (SIPA) started in October 2018, it took over the role of the IKI interface in Vietnam. The overarching goal of the SIPA project to support the Vietnamese government during NDC implementation in line with the Paris Agreement means that there are points of reference to all IKI projects.

In addition to this, the project currently advises the Vietnamese Ministry of Natural Resources and the Environment (MONRE) on reviewing and updating the NDC and revising environmental legislation so that the section on climate change harmonises with the requirements from the NDC.

SIPA also supports MONRE in developing an institutional framework for implementing the Paris Agreement and, among other matters, is providing advice here on the planning of a donor coordination mechanism for NDC implementation. There are also plans to develop five reduction strategies for different sectors with high potential for cutting emissions and which are consistent with the Sustainable Development Goals (SDGs). In addition to this, adaptation measures have been undertaken in two Vietnamese provinces that are very easily scaleable. These measures aim to improve the protection for regional ecosystems, as these play an important role in adapting to the harmful consequences of climate change. Taken together, these activities will provide sustained ecological and social support for Vietnam's route towards decarbonisation and also help to make the country more resilient to climate change.