In Seoul, 56 participants from 27 developing and industrialised countries reflected on the status of negotiations on the transparency framework of the Paris Agreement.

56 participants from 27 developing and industrialised countries, various international organisations and the EU Commission met in Seoul during the Annual Partnership Retreat of the Partnership on Transparency in the Paris Agreement from 12 to 17 October 2018. They discussed the status of the negotiations on the transparency framework of the Paris Agreement, and in particular reflected on options for shaping the modalities, procedures and guidelines (MPGs). They also shared their experiences in implementing the current Measurement, Reporting and Verification (MRV) framework.

The Annual Partnership Retreat is an established forum to promote the international negotiation process on climate transparency and to share experiences gathered in setting up national transparency systems in different countries. This year’s retreat took place against the background of the 24th Climate Change Conference in Katowice, Poland (COP24), which begins in a few weeks. During this Conference, rules will be confirmed regarding the implementation of the Paris Agreement. 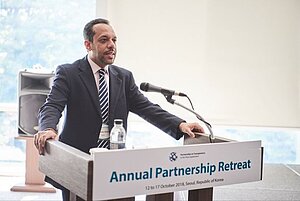 The retreat addressed all chapters of the current negotiation instrument on transparency of the Ad Hoc Working Group on the Paris Agreement (APA), with a special focus on the topics of greenhouse gas (GHG) inventories and tracking progress made in implementing and achieving Nationally Determined Contributions (NDCs). This instrument forms the basis for the negotiations on the transparency framework during the COP24.

One main question was how the flexibility in the implementation of the rules provided for in the Paris Agreement should be structured and how it should be applied to developing countries. The participants essentially confirmed the statement from the last retreat in 2017, which stipulated that flexibility should refer to certain elements in the MPGs and should not be a generally-applicable principle. The statement also mentioned that flexibility was closely linked to a country’s ability to implement the specific aspect of transparency. During the further discussion, it nevertheless became clear that the various countries and negotiating groups still have different opinions on many aspects.

The retreat helped the country representatives to better understand the individual negotiating positions of other countries and groups of countries, to discuss options and to compare them with specific implementation experiences.

In addition to the technical and political exchange of information, the participants also made recommendations for the orientation and future work of the Transparency Partnership. These recommendations will flow into the Partnership’s planning in the coming months and years. Many participants emphasised that the Transparency Partnership could play a useful role in the further discussion of open, detailed questions concerning the COP24 regulatory framework. Important topics for future events included measuring progress on NDC implementation and the transparency of adaptation. 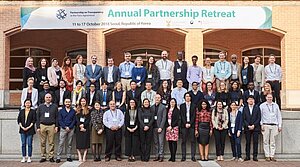 The Greenhouse Gas Inventory & Research Center of Korea (GIR) hosted this year’s retreat. The support project for the implementation of the Paris Agreement is financed by the International Climate Initiative (IKI) and implemented by the Deutsche Gesellschaft für Internationale Zusammenarbeit (GIZ) GmbH. The project supports the Transparency Partnership in its activities and has organised the annual retreats for many years.

Support Project for the Implementation of the Paris Agreement (SPA)

A network for transformative climate action

Transparency as the backbone of ambitious climate action

Briefings for a green economic recovery