The German start-up Africa GreenTec is installing Solartainer® to give people access to green energy.

Amaloul Nomade is one of roughly 30,000 villages in Niger. It is a place where the thermometer can sometimes climb well above 45 degrees Celsius. At such times the villagers have to stop whatever they are doing for the hot hours in the middle of the day, and in the school it is barely possible to hold classes. There are no electric air conditioning units here to ease the situation, not least because the village is not connected to the power grid. Storing food is also difficult as the old diesel generator they use for refrigeration is unreliable. In addition to being very expensive, fuel deliveries are often delayed. The lack of electric light prevents people from undertaking activities at night or in the dark. 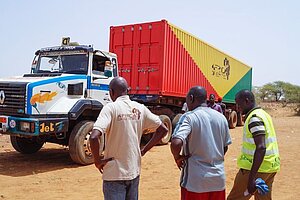 With their social start-up Africa GreenTec, married couple Aida and Torsten Schreiber have developed a possible solution to these problems. Their product, called a Solartainer®, comprises a photovoltaic unit and a rechargeable battery pack. They decided to form their company in 2014 after visiting a 20 MW diesel power station in Mali. ‘We wanted to give people an alternative,’ says Torsten Schreiber. ‘Solar power is cheaper, and above all, it’s cleaner.’ The company has already set up three facilities in Mali, and another 13 are under construction. The project in Amaloul Nomade is the first of its kind in Niger. 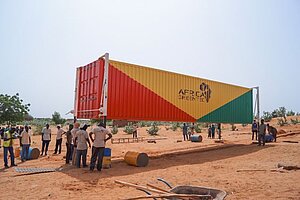 Thanks to the integrated battery pack, residents can still use electricity even after nightfall. The 41 kWp (kilowatts peak) facility is easy to transport and operate. In Amaloul Nomade, once all the connections have been completed, it will supply power to 300 households. For the time being, a service provider in the nearby regional capital Tahoua is responsible for maintenance work, but once Africa GreenTec has installed more facilities in Niger, it will train a local service team as it has in Mali. 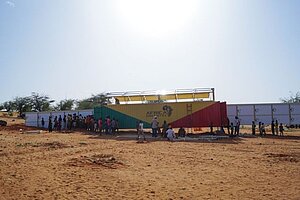 The project, including the transportation and installation of the Solartainer, was conducted as part of the Climate Partnerships with the Private Sector Programme, run by DEG – Deutsche Investitions- und Entwicklungsgesellschaft mbH. This programme falls under the International Climate Initiative (IKI) of the German Federal Environment Ministry (BMU). The aim of the Solartainer project is to establish a pilot facility that demonstrates how mobile solar power stations can bring electricity to rural parts of Niger in a way that is both economical and sustainable.

Amaloul Nomade is already benefiting from the facility. Today, evenings in the village are lively as people gather to share a glass of tea while reading or working together — or even surfing the internet, as Africa GreenTec has also set up a satellite-based web connection. The possibility to run small electrical devices is creating new business opportunities, such as the storage and sale of perishable foodstuffs. 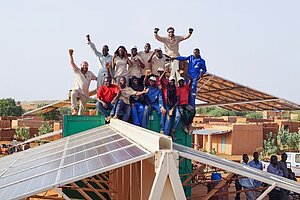 In this way, Africa GreenTec is showing how it is possible to provide a sustainable, off-grid power supply for Africa. And they’ve got big plans for the future. The company is providing loans to finance the delivery and installation of 50 Solartainers in Mali. This will open the way to green, cheap and reliable energy for as many as 250,000 people.

Mobile power to bring Rwanda's remote regions into the future