Viet Nam is reviewing and updating the country’s NDC, taking its international commitment on climate change to the next level.

Three years after submitting the country´s Intended Nationally Determined Contribution (INDC), which after COP21 became the country´s first NDC, the Vietnamese Ministry of Natural Resources and Environment (MONRE) has put forward cornerstones of an initial draft of its updated international commitment on climate change. It is the result of a comprehensive review and update process that was launched in mid-2017 by Viet Nam´s Environment Minister. Since then, several expert teams composed of line ministries’ representatives, development partners and national and international consultants have been working hard to review and update the first NDC (NDC 1) under the lead of MONRE.

The process has been accompanied by the “NAMA Project” of the German Environment Ministry’s (BMU) International Climate Initiative (IKI). In the scope of the project, technical experts reviewed the baselines and mitigation scenarios for the sectors already covered (energy, waste, Land Use, Land-Use Change and Forestry (LULUCF) and agriculture), and identified options for ambition-raising potential in cooperation with other experts in the convened task force. In addition, they provided a baseline scenario and respective mitigation options for the industrial sector as a key step in incrementally increasing the coverage of Viet Nam’s NDC.

Preliminary results of the NDC Review and Update were provided continuously for consultation throughout the whole process. The NDC task force developed a draft of the updated Technical Report on the NDC, drawn up during several writing retreats throughout the process and based on the input provided during the consultation events.

During the second major stakeholder consultation workshop at the end of August 2018 chaired by the Vice Minister of MONRE, Le Cong Thanh, important contents from the first draft of the Technical Report on the updated NDC (NDC 2) were introduced to a broad audience of approx. 80 participants from line ministries, scientific bodies and civil society representatives. The updates concern so far adjustments of the base year, the business-as-usual scenario, the conditional NDC mitigation target and the inclusion of an additional sector, ‘industrial processes’. 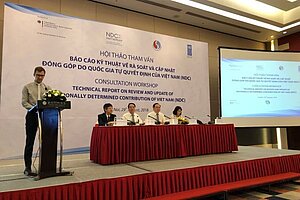 By preparing a comprehensive technical draft on the NDC that includes detailed provisions on data sources, calculated data and sectoral mitigation options, MONRE goes beyond the official requirements of the UNFCCC. The timely completion coincides with COP 24, which will be attended by a cross-sectoral Vietnamese delegation. The delegation also plans to introduce the country’s third National Communication to the UNFCCC before COP 24, which contains updated information regarding climate change and an updated greenhouse gas inventory. This engagement signals Viet Nam’s strong commitment towards international climate policy and its targets set under the Paris Agreement.

MONRE envisages finalising the technical report by the end of 2018 and plans to submit it to the government for approval by the first half of 2019, and subsequently to the UNFCCC.

The project “Creation of an Overarching Framework for Nationally Appropriate Mitigation Actions (NAMAs) and Monitoring, Reporting and Verification (MRV) in Viet Nam” is jointly implemented by Deutsche Gesellschaft für Internationale Zusammenarbeit (GIZ) GmbH and the Institute for Hydrology, Meteorology and Climate Change (IMHEN) in Viet Nam. While the project formally terminated at the end of September 2018, support for the NDC Review and Update process to the Vietnamese Government will continue under the IKI-funded project “Support to Viet Nam for the Implementation of the Paris Agreement (SIPA)”.

Mitigation and measurement of greenhouse gas emissions in Viet Nam