To cope with the impacts of climate change faced by the agriculture sector, Uruguay developed a new plan for climate action.

The Uruguayan National Adaptation Plan to Climate Variability and Change for the Agricultural Sector (also known as PNA-Agro, in Spanish) is a strategic instrument that will help the country achieve the national adaptation and mitigation commitments established in their first Nationally Determined Contribution (NDC), under the Paris Agreement, as well as contribute to the Sustainable Development Goals (SDGs).

The PNA-Agro proposes a strategy for 2050 and an action plan for 2025, with adaptation measures in four dimensions:

It aims to increase the adaptive capacity, build resilience and improve the livelihoods of rural populations through the adoption of sustainable animal and plant production systems, development and transfer of technology, information systems, climate insurance, resilient infrastructure, promotion of best practices, support of networks and organizations of farmers, and strengthening of institutional capacities for adaptation.

In Uruguay, the prioritization of adaptation to climate variability and change in the agricultural sector does not begin with the PNA-Agro. In fact, the national commitments established in the NDC, reflect the strategies that were defined in 2010 by the Ministry of Livestock, Agriculture and Fisheries (MGAP), and have since been implemented. The formulation of the PNA-Agro was carried out on the basis of more than a decade of national studies and research that contribute to better decision-making regarding adaptation actions, such as “Clima de cambios. Nuevos desafíos de adaptación en Uruguay”.

The process was led by the Unit of Sustainability and Climate Change within the Office of Agricultural Programming and Policy (OPYPA) of the Ministry of Livestock, Agriculture and Fisheries (MGAP), in coordination with the National System of Response to Climate Change and Variability (SNRCC). The United Nations Development Programme (UNDP) and the Food and Agriculture Organization of the UN (FAO) provided technical support under the Integrating Agriculture into National Adaptation Plans (NAP-Ag) Program, which is funded by the German Environment Ministry through the International Climate Initiative (IKI). 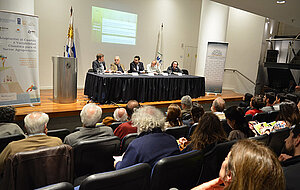 During the launch, the UNDP Resident Representative in Uruguay, Stefan Liller, expressed that the “NAP-Agro will contribute to a profound change towards a more resilient and more adapted model", while the Officer in Charge of the FAO Representation in Uruguay, Vicente Plata, emphasised that the document contains "a series of recommendations on the challenges that need to be addressed, based on scientific evidence and institutional knowledge and capacity, so that the Uruguayan agricultural sector can adapt to climate variability and change."

As underlined by the National Coordinator of the NAP-Ag Program, Cecilia Jones, during the launch the PNA-Agro is the consolidation of a three-year participatory process, which aimed to identify, order and prioritize climate actions. During 2017, a consultation process was carried out through a series of Adaptation Dialogues, in which more than 200 people from the private, public, academia and civil society sectors participated. These dialogues identified the main impacts of climate variability and change and key priority adaptation strategies focusing on the different productive systems, rural women and family farming. In addition, a series of workshops on adaptation were carried out in agricultural high schools across the country, in which nearly 450 young people participated. In July 2019, the content of the PNA-Agro was shared, discussed and validated in a meeting with actors from public agricultural institutions, subnational governments, civil society, farmer organizations and academia. Throughout the entire process of elaboration of the strategy, more than 950 people were involved.

Integration of the agricultural sector in national adaptation planning processes

Adapting Agriculture in a Changing Climate