The sengon tree, a lightwood that is native to Borneo, improves fertility naturally in degraded soils and thus can create alternative sources of income for smallholders.

In the rural regions of Central Kalimantan in the Indonesian part of the island of Borneo, much of the lowland tropical rainforest has disappeared in recent decades. Between 1985 and 2001, some 29,000 square kilometres of rainforest – an area roughly the size of Belgium – were felled to meet the worldwide demand for tropical timber and palm oil. This has had a drastic impact on biodiversity and ecosystem services; in addition, the environmentally harmful emissions caused by land clearance now make up the majority of Indonesia’s greenhouse gas emissions.

Since the 1980s, many areas of land in Central Kalimantan have been used in ways that result in severe soil degradation. The first stage involves the granting of timber concessions. After illegal logging, the land is then often used for rubber or palm oil plantations and finally for rice growing. This continues until the soil is exhausted; the fields no longer produce a crop and are left fallow. The challenge now is to prevent further forest loss and to rehabilitate the vast areas of land that have become severely degraded through decades of exploitation. 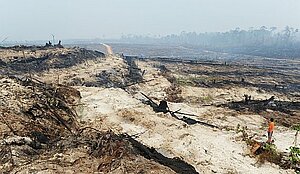 This is the focus of the feasibility study on ‘Rehabilitation of Degraded Land with Native Tree Species in Kalimantan’, which is being conducted by the German NGO Fairventures Worldwide and the consultancy company UNIQUE. The aim of the study is to investigate whether the native tree species sengon can be used to rehabilitate degraded land and create economically profitable land-use alternatives to the establishment of palm oil plantations.

As part of the study, sengon trees are being planted in cooperation with communities and smallholders on an area of 300 hectares within different forestry and agro-forestry systems. In the process, different silvicultural approaches are being tested and marketing opportunities for the downstream value chain are being identified. In the first planting phase, which ran from the end of November 2016 until its successful conclusion in February 2017, 346 smallholders planted around 157,000 sengon seedlings. The smallholders were additionally trained in various planting methods to enable them to also plant their fallow fields with these fast-growing trees.

This means that as soon as the timber is ready for harvesting, which is after five to seven years, the smallholders and their families have an alternative source of income and do not need to sell their fields. Furthermore, since sengon is a leguminous species, it binds nitrogen in the soil and thereby improves the fertility of degraded land. This offers an economically and ecologically viable means of making unproductive land usable again.

Planting degraded land is more profitable than selling it

One of the smallholders taking part in the feasibility study is 37-year-old Jonie from the village of Talaken. He lives with his wife Ervina and their two small children and works part-time as a teacher in Talaken. He heard about the project’s activities through events in the village, and he became curious. He has noticed for some time how many smallholders in the area are selling their land to large companies, and he has witnessed the expansion of the palm oil plantations. He accepts that the large companies can provide job opportunities for the community, but he remains sceptical: ‘If we farm and maintain our land and want to offer our families a future, we shouldn’t sell it. We must take action ourselves,’ says Jonie. By planting sengon in his field he plans to farm it long-term and make it fertile again.

The Borneo Institute is a locally established and well-networked organisation that is acting as the local implementation partner in Central Kalimantan. It coordinates which areas of land are planted for the feasibility study and is also responsible for the accompanying awareness-raising measures. It forms the link with the farmers’ groups from the three communities in the province of Gunung Mas that are participating in the study. The groups are involved and consulted through village meetings, group discussions and quantitative and qualitative surveys. In addition, the project’s activities include drawing up maps of the planted areas; this is an essential first step in enabling the smallholders to apply for land rights. The Indonesian Ministry of Environment and Forestry is also involved in the project, since this will allow the results of the study – such as information on the costs and yields of various silvicultural options, or the potential for carbon storage – to be used later for larger-scale schemes. At provincial and rural district level, the forestry authorities are also informed of the findings.

At the same time, the project is working with wood-processing businesses on the island of Java to develop innovative lightwood products that could replace energy-intensive construction materials such as steel and concrete. Among these innovative timber products are glued laminated beams made of sengon; these are used in roof construction because they are lighter than steel or concrete but have the same load-bearing capacity. At the Trade Expo in Jakarta in October 2016, a specially designed booth made of lightwood drew the attention of the Indonesian timber industry to the potential of lightwood products. The long-term aim is to create a new market for producers in which conventional building materials will be replaced by native lightwoods.

As well has reducing climate-damaging emissions, the feasibility study also makes an important contribution to transformation of the Indonesian wood sector, which has until now focused on lower-yielding and more climate-sensitive single-species timber plantations. A first step has thus been taken on the path towards a large-scale change in land use in Kalimantan and a more sustainable timber value chain. 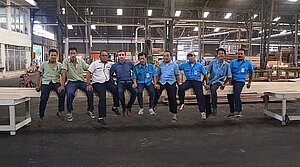 The project ‘Rehabilitation of Degraded Land with Native Tree Species in Kalimantan’ is funded by the German Environment Ministry as part of the International Climate Initiative (IKI).