The United Nations theme for this year’s International Women’s Day is ‘Time is Now: Rural and Urban Activists Transforming Women’s Lives’. To mark International Women’s Day and reflect the chosen theme, GenderCC - Women for Climate Justice describes its work as part of the Gender into Urban Climate Change Initiative (GUCCI) project. This project is supported by the German Government’s International Climate Initiative (IKI) and puts gender equality on the agenda in pilot towns and cities in India, Indonesia and South Africa.

‘The project devises approaches to improve gender equality in municipal policy on climate change mitigation. Urban populations are affected by the impacts of climate change and by climate adaptation measures and action taken to reduce greenhouse gas emissions. However, these factors do not affect all population groups equally. Social factors and gender play a major role in issues of adaptability and responsibility for greenhouse gas emissions and in determining whose interests are considered in climate change policy. Gender differences in the impact of climate change and measures to mitigate it can be attributed to socially constructed gender roles, a traditional division of labour and the resulting inequalities. 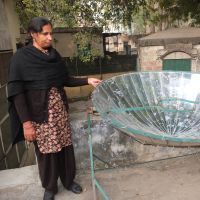 Yet climate change is not the only challenge our partners face. The work of women’s groups is threatened by religious fundamentalism, for example, while women’s mobility – particularly in the evenings and at night – is severely restricted due to sexual violence in towns and cities. These issues are structural in nature, and there are no short-term solutions. Dismantling structural inequalities is precisely the approach our project is taking. Through gender assessments of institutions, processes and policy approaches, and through training measures and local projects with those affected, we highlight the gender inequalities that are being amplified by climate change itself or by municipal policies to mitigate it. We present positive examples of how climate change policy can work at a local level  in a way that promotes participation and gender quality. In their status reports, our partners have illustrated that gender equality and climate change policy need to be considered together.

For example, in Makassar and Jakarta (Indonesia) and in Mumbai (India), climate change is threatening the livelihoods of residents who have earned a living from fishing for generations. The division of labour in the fisheries sector has typically been gender-based, with men going to sea to fish while women harvest mussels near the shore and process the catch. Climate change is having a far-reaching impact on these communities. Extreme weather events, such as storms and floods, are more common, and the fish population is undergoing marked changes as water temperatures rise, which is making fishing difficult. In addition, major projects such as the controversial Great Garuda flood wall project in Jakarta, are likely to make mussel harvesting impossible. Alternative employment opportunities, for example in the tourism sector or higher-quality fish processing, would help these communities. There is, however, at least one local project that focuses on precisely these issues and works with local communities to devise solutions and support them in approaching municipal politicians, to ensure their voice is heard. 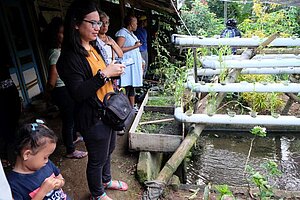 After the status reports were completed, the partners tried out the Gender Assessment und Monitoring of Mitigation and Adaptation (GAMMA) method developed as part of the project and were able to draw important conclusions about their towns and cities: whether there is an awareness of gender issues at all, whether approaches for considering gender issues exist, and whether women are involved in policy development. While for most of the towns and cities involved, a gender perspective on climate change was an entirely new concept, initial steps have already been taken in the city of Makassar in Indonesia. Here, the Mayor himself is supporting the integration of gender mainstreaming as a cross-cutting issue in measures to mitigate climate change. In the future, gender experts will be involved in developing climate change mitigation plans. The city is also adopting participatory approaches to get the wider population involved. However, there is still a lot that needs to be done to enable women  to participate effectively in consultations. 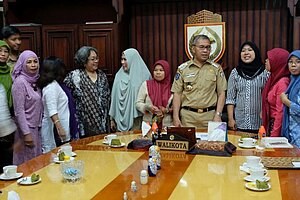 As well as the assessments, our partners conducted a number of stakeholder workshops over the past year to raise awareness of the project topics among stakeholders in the towns and cities – although the desired results were not always achieved. In one city, staff from Human Resources were sent instead of those from the Climate Change department. Their explanation was that gender equality  is usually dealt with by Human Resources! We clearly still have a lot to do – at every level!

Internationally, gender and women’s organisations celebrated success at the most recent COP23 in Bonn, as a Gender Action Plan was finally adopted. The plan sets out a total of 16 different measures in five priority areas over the next two years. These include holding workshops in which members of the country delegations can learn about methods and instruments for integrating gender aspects into national climate change policy and setting up a travel fund to support participation among female delegates and representatives of civil society, particularly grassroots and indigenous groups. The plan also aims to ensure that existing mandates involving gender aspects are actually implemented in local, national and international policy on climate change. However, there is a shortage of funding to implement the Gender Action Plan. Experience allows us to remain hopeful that international policy will also have a positive impact on national policy. If not, then governments can expect pressure from women’s and gender organisations – we will not let this go!’ 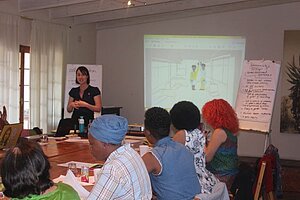