The adoption of the Gender Action plan was one of the big achievements of the UN Climate Change Conference COP23 in Bonn. Shortly before its announcement, we spoke to Ndivile Mokoena about her work as a project coordinator for GenderCC. Mokoena is responsible for coordinating the project Gender into Urban Climate Change Initiative (GUCCI) in South Africa, which focuses on assessing and monitoring the gender component of climate change policies and programmes in two South African cities and is funded by the International Climate Initiative (IKI).

Ms Mokoena, what was the status quo of climate policies in South Africa and how well was gender integrated when you first started your project?

In 2015, we identified the cities of Johannesburg and Tshwane as suitable project cities, mainly because at that time they had some strategies and programmes in place in relation to climate change. In 2016, we introduced the GUCCI project to the cities and started looking at the climate change status quo of the two cities. The results were that, although the country does have policies and programmes in place for climate change, there is no implementation yet and no gender perspective at all either. Though gender equality is part of our constitution in South Africa, it has only been considered by government and various corporates when it comes to gender balance; women empowerment and statistics. However, when it comes to integration of the gender element into policies, especially climate change policies, nothing is happening. There is very little focus or emphasis on gender, the cities have a key focus on women and poverty. 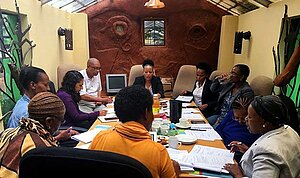 How did you attempt to change that?

After we looked at the status quo of climate change policies, the next step was to do interviews with the key people who are managing climate change in both cities, mainly in adaptation and mitigation and other sectors like sustainability, environment, energy and agriculture as well people who are in the Gender Forum Desk or department that deals with women, children and disabilities. The first assessment focused on the institutional procedures and how they do their planning, consultation, and budgeting or gender budgeting specifically. We also looked at how they consult, whether they consider people at local level or specific issues of women and men. They agreed that, they have never looked at gender as an issue in climate change and when they refer to women and children in their reports and research, it’s based on their vulnerability studies. We found out that they do not have any sex or gender disaggregated data even with their vulnerability study and research. They appreciated that we made them aware, we wrote a report, highlighting the gaps and made recommendations.

What were some of your recommendations and were they taken up?

When decision makers do their policies, they need to consult more with women groups and local communities through the relevant structures. They also need to get gender experts to help and advise them on how to integrate the gender component into their policies for a gender sensitive approach. The process is still on however it might take longer since there is a new political administration in the two cities and the new administration is pro service delivery. We now have to work with the officials who are handling climate change on how we can look at climate change issues and make them a service delivery issue, because without the buy-in of the politicians, we will not see progress. There is also a great need for climate change education in the cities to break down the silos, as various departments and sectors work in silos, there is no synergy. We strongly recommended that women should not be looked at as victims but as a strong part of the solutions, as entrepreneurs, defenders, innovators and agents of change.

How do you develop recommendations? Are they influenced by how other countries integrate gender issues into climate change policies?

Yes, our recommendations were influenced by what is happening in other countries, sharing of experiences, challenges and successes globally and learning from each other. However, we tried to link what we learned from others to our situation locally and how women in our country are impacted by climate change and in which sectors. We gave examples on what the government can do, e.g. both cities have introduced the bus rapid transit system however not as a climate change initiative, it came as a service delivery to improve the transport system, later on they saw this as a climate change mitigating factor.

How does this bus rapid system relate to gender issues?

To add a gender component to this issue, you have to look at the bus routes, whether they cater for a woman who has to go to work, but has to take her child to a crèche or a childcare centre first? Whether, the bus stop where woman have to alight at after work– is safe and lit enough? If there is an open field where a woman’s safety will be at risk, and whether the interior of the bus caters for pregnant women, people with disabilities and young children. These are some of the gender sensitive issues they need to consider when taking decision on policies.

Mandate of the project is that we do advocacy work, reach out not only to officials, but to the communities as well and currently there is a huge gap between communities and the government in terms of communication and consultations. With our advocacy work, capacity building workshops and outreach programmes, we bring all stakeholders together in one room.  Communities are given an opportunity to identify their local struggles and talk to government officials about their challenges. We are trying to promote the bottom up approach, governments need to consult and listen to people, and not decide for the people when they make policies and take decisions. The interactions have been appreciated by both communities and the governments and the fact that they are now able to go into one room without any ill feelings and be able to discuss issues and understand each other.

Why is the work with different stakeholders and the communities so important? 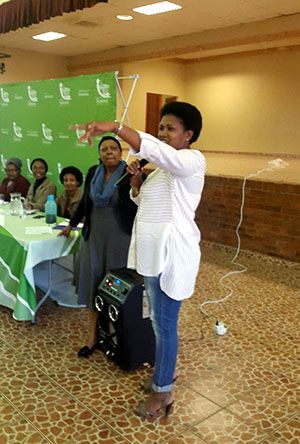 As Gender CC South Africa, we have been working on gender and climate change issues for a long time and it is only now through the GUCCI project that we are really engaging directly with government officials on climate change & gender policies. However, before, we would always engage with government at the level of public hearing e.g. on green paper or an energy bill/act that is about to be passed. Our main engagement and interaction when it comes to climate change issues was with the communities and specifically women, because the gender scale is still not levelled between men and women. We work mostly with women on energy, and water issues and food security in relation to climate change impacts.  We link women up to resources, right platforms and influential people through networks, where they are able to have a say and contribute to public hearings and be empowered to deal better with their own unique situations.

What are your thoughts and hopes for COP23 in relation to your work?

Sometimes it is frustrating when nothing tangible is coming out of the negotiations. However, in relations to my work back home, I would really like to see gender issues being given highest consideration and local experiences and knowledge taken seriously. When I go back home, we usually organise meetings with different constituencies especially the local and grassroots women we represent and give a feedback on COP23. Communities want to hear something that will excite them and give hope i.e. they are at least acknowledged as people at local level, as they are the first victims of climate change. But, if we go back and tell them about all the technicalities that are taking time at the COP it will really depress and discourage them. We need to give them feedback on issues directly related to their issues. I hope that these processes will get to a level where they can really talk the language of people at local level and give hope for a system change, where people can benefit from these processes.

Thank you very much.

Find out more about the gender action plan from the press conference with Ndivile Mokoena at COP23: https://unfccc.cloud.streamworld.de/webcast/putting-the-gender-action-plan-into-practice