Indigenous peoples are of utmost importance for the protection of biodiversity and climate. Over 30 IKI projects currently support the preservation of their traditional ways of life.

Indigenous peoples live in all regions of the world and represent a large part of cultural diversity. According to the IPBES report they own or manage more than a quarter of the world's land. In addition, about 35 percent of the land areas that are protected worldwide are located on indigenous territories. These areas are often home to a great diversity of species and serve as natural carbon sinks. Therefore, indigenous peoples play a crucial role in the conservation of biodiversity and the mitigation of climate change, despite being less than 5 percent of the global population, with approximately 370 to 500 million people. It is against this backdrop, that the international community recognises the contribution of indigenous people to make long-term strategies and goals for the conservation of biodiversity and climate change mitigation more sustainable. Indigenous people can also play a key role in achieving the goals of the Convention on Biological Diversity (CBD) and the goal of putting  a greater part of the earth's surface under protection by 2030.

A spiritual connection to their land and a life in harmony with nature are often fundamental components of indigenous values and beliefs. Their traditional knowledge includes sustainable practices that maintain the balance in nature and thus secure the livelihoods of the indigenous people in the long term. The traditional knowledge and practices of indigenous peoples also hold great potential for societies in the rest of the world, for example, for research into the medicinal properties of plants or biological pest control. However, the close relationship of indigenous people to nature also makes them particularly vulnerable: E. g. their existence is threatened by biodiversity losses, climate change and environmental degradation through deforestation for agriculture and the extraction of natural resources.

Despite cultural differences, different indigenous people share common problems. They are still often marginalised at national and local level, and are affected by extreme poverty and human rights violations.

This is one of the reasons why the International Day of Indigenous Peoples on 9 August aims to draw attention to the situation of indigenous peoples. This year, the focus will be on the impact of the COVID 19 pandemic, as indigenous people are  vulnerable to emerging viruses and strongly affected by the consequences of the pandemic, depending on the degree of their integration with the rest of the society or their degree of isolation. These vulnerabilities include poor access to health care and staple food and the loss of sources of income. At the same time, indigenous people can also play a crucial role in preventing future zoonoses and pandemics by preserving natural habitats and protecting areas of retreat.

The International Climate Initiative (IKI) has been funding projects and approaches to strengthen indigenous people and their role in the conservation of biodiversity for many years. The recognition of indigenous structures and lifestyles and the increase of their participation in project approaches and decision-making processes is a central component of project work. This is particularly vital in the areas of land use planning, protected area management and monitoring.

IKI currently supports more than 30 projects that have a connection to indigenous people. These projects are spread around the globe and protect ecosystems from Peru, Ethiopia and Indonesia to northern regions of Russia. Since 2017, all IKI projects have been checked for safeguards to avoid or minimise potential negative consequences of project activities for indigenous people. 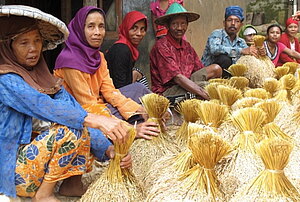 The northwest regions of Colombia are a biodiversity hotspot and home to many indigenous and Afro-Colombian communities that are exposed to pressure from the mining industry. In this region, there is an IKI project supporting the development of land use planning strategies for indigenous territories, strengthening community production systems and demonstrating possibilities for a sustainable use of the region’s biodiversity. The focus is primarily on indigenous women, who are empowered through the development of planning strategies for land use. These life plans include ethnic approaches and aim at a sustainable use and management of tribal areas.

In Peru, a project is helping to protect the biodiversity of the Manu biosphere reserve by involving the indigenous people living there in the management of the reserve and its natural resources and introducing new models for shared decision-making. Income generating measures and the reduction of human/wildlife conflicts also contribute to the long-term protection goals. Currently, the IKI Corona Response Package compensates and further diversifies sources of income from sustainable economic activities in the buffer zone. The aim is to secure the indigenous communities income  and the management of the biosphere reserve.

Peru’s second largest forest area lies in the Ucayali region that unfortunately has the highest deforestation rates in the country. An IKI project is working in this region to improving forest protection through the establishment of indigenous technical forest management units, intercultural training for indigenous forest management and monitoring support for the indigenous population to prevent illegal forest use.

Forest protection and the management of natural resources in Manu Biosphere Reserve, Peru

IKI support for indigenous groups in coping with COVID-19

Working together towards a sustainable recovery

Intact ecosystems vital to prevent the spread of pandemics

Every animal and plant species counts