Interview: To know the colour of water 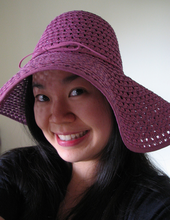 Catherine Sarah Young is an interdisciplinary artist with a background in molecular biology, fine arts, and interaction design. In her work with the ‘Regional child-centred climate change adaptation in Southeast Asia’ project, funded by the International Climate Initiative (IKI), she linked art with climate change and adaptation.

You worked with children in South-East Asia, linking art with climate change and adaptation. How did this start?

Plan International invited me to give three art workshops in their project areas in Lewoleba in Indonesia, Chiang Mai in Thailand and Tacloban City in the Philippines. These are places experiencing extreme effects of climate change. When I was there, I realised that the things I was trying to get the Global North to see, that climate effects could get worse and worse, was already happening to a lot of people. So the project asked me to work with children and young people. We had kids as young as six years old as well as teenagers. The idea was to get the kids to make their own art and to present their perspectives about climate change. 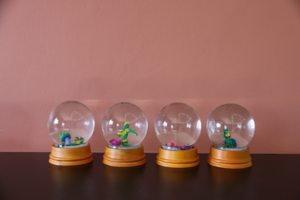 How did you engage the children to create art related to climate change and adaptation?

We had a lot of activities. I had them make sculptures of things in their communities that were vulnerable to climate change. They sculpted out of clay and then we baked the clay in a toaster oven to harden it. We then turned this into snow globes. The project was called ‘Storm Globes’ and showed the things that might be affected by sea level rise. We also got the kids to take photographs of places in their communities for the ‘Climatoscope’ project and to create their own perfumes of things we could lose because of climate change for ‘The Ephemeral Marvels Perfume Store’. The latter was the most mysterious project because we don't usually use our sense of smell in art. Usually it is sight and sound. But our sense of smell is the most visceral and the most intimate of senses. We don't have very clear ways of speaking about it. But when it comes to climate change, when there is an extreme climatic event, we can sort of smell a sense of a particular place. The ephemeral nature of scent is also a metaphor itself for how things we take for granted can disappear. Finally, the kids also did paper architecture for ‘Future Resilient Communities’ and filmed shadow theatre.

Did you manage to do all these activities with all the children involved?

Did you find that the children already had an awareness of climate change?

I think these kids had experienced so many climate change effects already — more than a lot of the adults I have worked with in many other countries. And they were able to really express themselves. It was really enlightening how a lot of stories came out that you wouldn't typically hear, especially for the kids who experienced trauma. If you just leave them in a quiet environment and give them certain tools, then they are able to express themselves in a different way. So by using art, you can externalise their emotions and their stories. And at the end of it, you have the actual artwork that they made, which may resonate with someone else when the work is exhibited. And even though they maybe had certain dark or happy thoughts, just to see them out there can be very cathartic and very therapeutic. 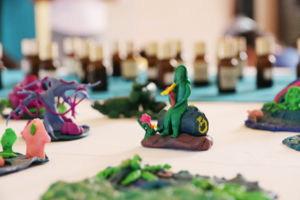 Were there any especially touching moments during your workshops?

There was a 12-year-old girl who told the group that in the future she didn't think kids like her would know the colour of water. She said that maybe they'd think water is brown because of a storm and they wouldn’t know that water is blue. I was just floored by that. I have done so many workshops but these are the ones I feel were really close to my heart. I felt that these kids taught me so many things, and I’m grateful to be able to showcase their work in the future, as this is definitely not the only exhibition of their creativity I’ll be holding. I usually collaborate with researchers and think tanks, and by being able to bring in all these new experiences, it was like I was closing the loop. I felt like I was going back to when I first started working on climate change in 2013.

What will happen with the artwork after the workshops?

This presentation at the Conference on Community-Based Adaptation is the first exhibition of the work ‘The Apocalypse Project: Child's Play’. This is the fourth body of work from my years of doing art about climate change and through different lenses. I document everything and put it online. I want these communities to know that their creativity matters and that these works have the potential to inspire other people. We will probably have more exhibitions in other countries. I always think each year is the last year I am going to do climate-change art. But then I keep getting calls. So I think I might be stuck doing this for the rest of my life. But I am very, very happy to do that. 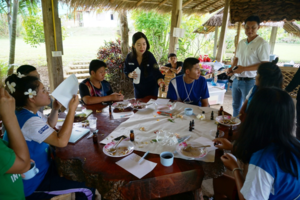 True, and I think it is very easy to become pessimistic about climate change. As someone who founded something called ‘The Apocalypse Project’ people tell me that I am a pessimist!* But climate change isn't fun! I think how we choose to engage with it should be a little bit more fun, because it is usually politicised and much of the rhetoric is very divisive. With art, we can look at climate change as something that affects us all as human beings. Look, we’re all going to die. If I'm going to go down, I want to go down knowing that I was doing something. [*Note: ‘Apocalypse’ translated from the original Greek means ‘disclosure’ or “lifting of the veil.’ I do not use ‘apocalypse’ in the dystopian sense.]

So did the children leave your workshops with optimism?

I hope they did. I think the activities were pretty fun for them. For me, because they had already experienced tough events, being able to do something with art is very beautiful. Creative expression itself is very beautiful. Art, because it speaks to our common humanity, can be transformative, though as an artist this means a lifetime of making and engaging people. So this is why disseminating the children’s outcomes and letting them know is very important. It’s also great because during exhibitions I don’t have to speak. The work speaks for itself. 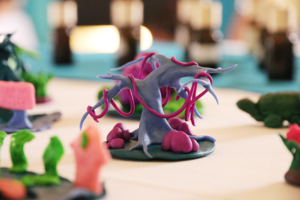 Catherine Sarah Young would like to thank the Plan International staff in Indonesia, Thailand, and the Philippines, particularly Kimberly Junmookda, their Regional Climate Change Adaptation Specialist. They were the ones who arranged it all and made everything possible.