Interview: Saving the birthplace of coffee

Ethiopia is a globally significant biodiversity hotspot and is considered to be one of the world's most species-rich countries. Mesfin Tekle worked in a public private partnership project in Ethiopia, which was focused on conservation and marketing of forest coffee, before joining The Nature and Biodiversity Conservation Union (NABU) in 2009. He is currently the Local Project Coordinator of the IKI project “Biodiversity under Climate Change: Community Based Conservation, Management and Development Concepts for the Wild Coffee Forests”. Within the project, more than 474 000 tree seedlings have been planted on 570 hectares of degraded forestlands.

Ethiopia’s Kafa Biosphere Reserve is often called the birthplace of arabica coffee. Could you please describe the region and the challenges it is facing? 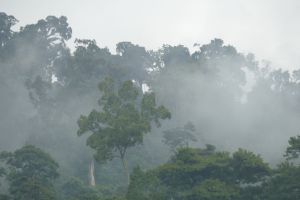 The Kafa Zone is endowed with rich natural resources where more than 50 percent of the land is covered with forests; cloud forests, wild coffee plants, bamboo, and also lowland forests. But there are great challenges for the biodiversity in the region caused by global warming and climate change. We have highly affected people, cattle and natural resources, which are not accustomed to the recent cold. The frost is affecting people’s skin, lips and the growth of vegetation, which in some parts causes animals to die. January is the hottest month in Ethiopia. But this year it is getting very cold in the mornings and evenings – even close to zero degrees. And this is affecting people because their housing, clothing and agricultural systems are not adjusted to these conditions.

Within the project you were working on community-based strategies for environmental protection. How did this look like? 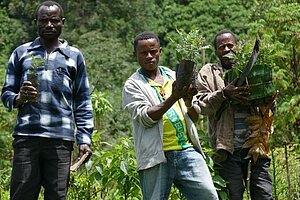 Community-based means participation, ownership and immediate benefit for the communities involved in the project. There were three pillars that the project was focusing on: one was the rehabilitation of forests and wetlands where people live; the second one was the assessment of products which can bring income or result in a livelihood improvement for the people; and thirdly, a long-term investment into the knowledge, the understanding and the change of attitude of people towards climate change, to understand it and to prepare themselves to confront it or to adapt to it.

Which target groups did you work with?

Reforestation is mainly focused on degraded forestlands. From the project perspective, we saw three users or claimants of the forestland: the local indigenous people who are using the area as communal land resources, community decision makers on the lowest administrative level who take part in the land administration, and at regional level there is the regional estate, represented in regional offices. So we were working with all three groups. Also, we were employing rangers. Our rangers are former government development workers who are mobilizing the communities. They were selected with the support of the local Department of Agriculture. Their main task was promoting the environment, biodiversity, the Kafa Biosphere Reserve, and climate change issues among communities. They are also integrated into all other project activities conducted in the area. 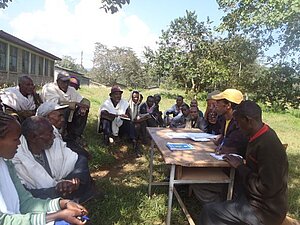 What was the role of the government?

Participation, facilitation, and sometimes they co-implement with us, like in the case of the identification of deforestation sites. There are so many degraded forestland areas which demand reforestation; but it is the best to work together with the lowest administrative unit/ governmental institutions to prioritize where to go first. Also, communities accept a project much better if it is supported by the government.

Within the project you were specifically addressing women. Could you please explain why and how you worked with them?

I think women are often the most responsible in the household and in the society. At the same time they are being neglected by the society, they are not visible in terms of benefiting, contributing, participating and being represented with their interests. So what we did was that we used traditional coffee ceremonies as a participatory method in the project. Coffee is served by women. When you enter a house, women are serving, providing and socializing. So we jumped in here and brought issues of the environment, development and biodiversity into the dialogue that takes place during coffee ceremonies. Thereby, the discussion of these topics reached the women, too, and we invited them to participate. 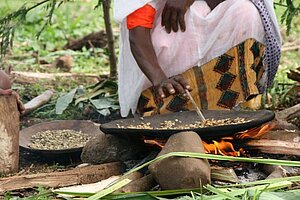 How did you enable women to actually participate in the project?

There are three major activities that we implemented: women are the main actors in the home gardens, especially for spices and medical plants. And women, especially from the minority groups, are manufacturing traditional pottery. So we supported them to improve the quality of their pottery products. And we also worked with women on regional agricultural products – mainly because of climate change. Women will be the ones who will shoulder the burden – to feed the children, to feed their families and also the neighborhood. So we worked with them to identify which crops are more resistant to a changing climate, in extreme hotness and in extreme coldness. The women know which varieties are better than others. They selected six crops and five were tested together with 184 women; then the findings were disseminated among 256 other women in the neighborhood who were not part of the first testing phase. Now we are disseminating the knowledge in an even bigger area with the help of zonal, woreda [district] and kebele [ward] women council members and through other channels. 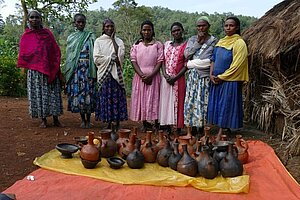 How were the activities perceived by the women?

The women were very open, but still they were very influenced by the men. Men still dominate in decision making in rural areas. So we brought economic and also security issues, which are important to women, into the debate. We also made use of existing public programs. There are affirmative actions from the government’s side to promote women’s participation and equal rights on owning assets. We used all these mechanisms to encourage women and to enable their participation in our activities. 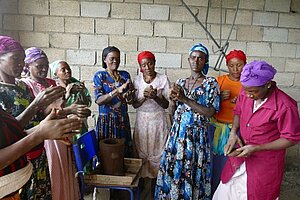 How would you summarize the impact of your project?

I think we achieved to reach the broader community, to create a better understanding and to become more aware and also to prepare ourselves for the mitigation and adaptation to the ever growing and intensifying climate change. Regarding our activities, especially the reforestation made the community realize that it can rehabilitate or reestablish degraded natural resources and also their ecosystem services. And thirdly, we are serving as a pilot area. There are so many people and communities from other regions coming and asking us to share our experiences.

And for you personally, what was your best experience in the project?

My best experience was that people have a very strong connection to nature, not only using it, but also thinking about how to maintain it in the future. And people know that collaborating and exchanging ideas is beneficial for the future of the community.

What plans do you have for the future?

We are working on the handing over of some of the activities to the communities, like the reforestation sites. And we also want to replicate the project activities and results in other areas and thereby achieve a greater impact, so that they will be taken up by the government and that the project will have a broader overall impact.

Is there anything else that you would like to add?

Yes! Sometimes people feel that there is a large distance between the financiers and the beneficiaries of a project. However, people here have connected to Germany through the NABU project. The project has really moved something. Although we were working in a comparably small area, the project reached people in the surrounding areas and they came to our area for the exchange of experiences. The area has also become a source of scarce crop seeds that are disappearing elsewhere. The people here thank Germany. And it’s not government to government – but it’s people to people. 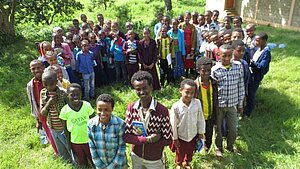 Biodiversity in a changing climate: community-based strategies for the protection, management and development of wild coffee’s region of origin