Former IKI fellowship holder Allan Mubiru is committed to gender equality and the FairChain approach in the coffee industry.

A new Fairtrade coffee is set to hit the market in Germany in summer 2018 – it is ‘100% made by women’ in Rwanda and marketed in Germany. Allan Mubiru, a former fellow of the Alexander von Humboldt Foundation, which is supported by the International Climate Initiative (IKI), helped to make this happen. During his fellowship from July 2012 to November 2013, Uganda-born Mubiru, who is an economist and climate financing expert, worked for atmosfair in Berlin. He then moved to Rwanda where he remained committed to achieving a more sustainable world by promoting gender equality and the FairChain approach. Together with his former atmosfair colleague, Xaver Kitzinger, Mubiru founded Kaffee-Kooperative.de. 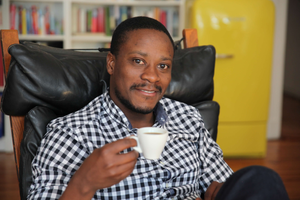 This socially responsible startup sees itself an extension of Rwanda’s coffee cooperatives in Germany. This is particularly true in the case of the cooperative Rambagira Kawa (‘May coffee spread the world’), which is bringing a coffee to the German market that is processed entirely by women, from the beans to the packaging. In keeping with the FairChain approach, the added value created from coffee production remains in the producer country and the women's cooperative. 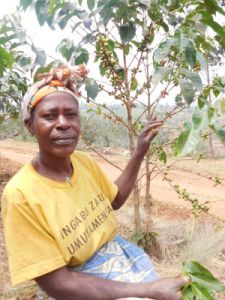 Women do the bulk of the work in Rwanda's coffee sector. Around 70 per cent of the time, it is women who see to the sowing, cultivating and harvesting of coffee plants, and the hulling, washing and selecting of coffee beans. After their tiring work in the field, the women then often have to perform household duties, look after children or care for relatives, and therefore regularly work up to a 16 hours a day. In contrast, their male colleagues and partners have an eight-hour working day on average. In spite of this, women have hardly any or only restricted access to the income generated from coffee production. To make matters worse, only 3 to 20 per cent of cultivated agricultural land in the Global South is owned by women, causing them to be excluded from decision-making processes and legal protection in the long term. 'Coffee 100% made by women' has therefore deliberately set out to boost the financial independence and decision-making power of women in the coffee sector.

Marketing coffee in Germany sourced from women's cooperatives secures the income of women farmers and assists them in moving towards gender equality. To ensure that the relevant standards are met, the coffee is being supported by the International Women's Coffee Alliance (IWCA). The Chairperson of the IWCA Rwanda Chapter and Managing Director of the partner roasting plant, Angelique Karekezi, is also the namesake of the women's cooperative's first coffee: 'Angelique's Finest'. Following a successful crowdfunding capmpaign to finance the market launch of 'Angelique's Finest', this speciality coffee will be available in stores in Germany from August 2018. There are plans to get more cooperatives on board in future, to allow even more women in Rwanda to benefit from higher incomes and progress towards financial independence and gender equality. 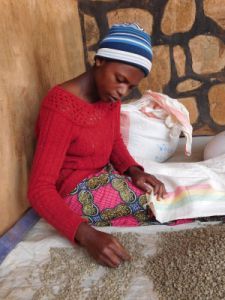 The increases in income are achieved by roasting and packaging the coffee, which means that the added value created from coffee production remains in the producer country. The aim is for up to 50 per cent of the sales price to reach the country of origin. With traditional Fairtrade coffee, the producer country often only ends up with around 15 per cent. Higher added value creates new jobs, improves infrastructure and helps coffee producers identify more with their product, which ultimately increases the quality of the product. Trading directly with the producers cuts out the middlemen who decrease profit, thus making FairChain products affordable for the consumer, despite their FairTrade status and high quality. The objective is to move FairChain products out of the niche and into the mainstream, and thus sustainably improve the economic situations and lives of coffee producers’ in Rwanda. 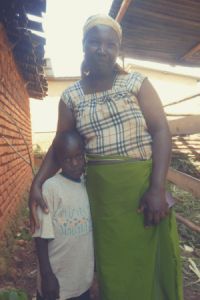 The women at Rambagira Kawa are proud to talk about their work in coffee farming. The slogan 'Strong Women, Strong Coffee' hits the nail on the head, says Odette Murekatete, president of the group. 'We stand up for ourselves and work hard to feed our families – with or without a man to support us.'

The Humboldt scholar from Mexico

In search of the giant squeaker frog

Climate-intelligent agriculture engagement by the IKI

Sharing knowledge with the rest of the world