The Minister for Fisheries and Marine Resources highlights the importance of Marine Spatial Planning in Namibia.

In a media event in November 2021, the Minister of Fisheries and Marine Resources, Derek Klazen, highlighted the role of Marine Spatial Planning (MSP) in Namibia’s approach to sustainable ocean development and outlined the approach taken by Namibia on MSP, and explained the steps taken.

The Minister explained that MSP is considered to support putting sustainability at the heart of Namibia’s ocean management to enable improved protection, sustainable production and just prosperity that benefits people, nature and the economy.

“The aim is that we use MSP to organize better how we use our sea and to balance socio-economic benefits and ecological sustainability. This should ultimately contribute to a healthy, safe and well understood marine and coastal environment that is sustainably and transparently governed and delivers maximized social and economic benefits to Namibia”, the Minister highlighted.

He also highlighted the significant role of the Namibian interministerial working group on MSP, which leads the practical planning process, and which has been essential in making the MSP process a success.

The steps taken to-date include the development of the so-called Current Status Report, which the Minister officially presented to the public. The report is an essential step for the Namibian MSP process. It provides a national overview and establishes a knowledge baseline that identifies the key issues that need to be addressed in the first Namibian Marine Spatial Plan for the central coast. 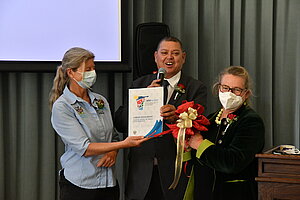 Minister Derek Klazen concluded that the government is currently in the process of finalizing the first Marine Spatial Plan with stakeholder engagement. The draft plan is also undergoing a strategic environmental assessment, which will aid its quality.

Support through the International Climate Initiative

The implementation of MSP in Namibia is supported through the International Climate Initiative (IKI).

Namibia’s ocean is one of the country’s greatest assets. The fifth National Development Plan seeks to promote the sustainable use of the sea and its resources for economic and social development. Ecosystem-based Marine Spatial Planning (MSP) is recognized as the spatial foundation for achieving such sustainable ocean development.

Namibia’s marine environment is shaped by the Benguela Current Large Marine Ecosystem (BCLME) which the country shares with South Africa and Angola. It is known for its extraordinary productivity and unique biological diversity.

Namibia’s coastline extends over 1.572 kilometers. The Namibian sea is fundamental for the well-being of many Namibians: A high proportion of the national income is generated through industries that depend on the ocean’s resources such as fisheries, mining, and tourism.

Namibia has recognized the important role of MSP in achieving national development goals: It is seen to provide the spatial foundation to sustainably manage 100% of the marine area under national jurisdiction. The significance of MSP corresponds with Namibia’s leading role in the region and internationally through the participation of State President Hage G. Geingob in the High Level Panel for a Sustainable Ocean Economy.

Conservation and Sustainable Use of the Benguela Current Large Marine Ecosystem

Commitment to Sustainable Development of the Benguela Current