The UN campaigns for the protection of the oceans every year on 8 June. Many IKI projects also contribute to the conservation of marine ecosystems.

The world is facing a climate and biodiversity crisis. The oceans are in poor condition worldwide and the impacts of climate change are exacerbating this dramatic development. The special report of the IPCC (Intergovernmental Panel on Climate Change) on the ocean and the cryosphere (ice-covered areas of the planet) shows that systems particularly affected by the impacts of climate change (e.g. the Arctic, corals, low-lying coasts and islands) lie in marine regions where the increasing impacts of global warming can be clearly seen. The impacts caused by future climate changes therefore pose a major challenge for the ability of marine ecosystems and societies to adapt to them.

Such impacts include, for example, rising sea levels, oxygen deficiency in the oceans and the warming of the sea water. The consequences for the oceans and coasts are already very serious today – and they will become even more critical in the future if no countermeasures are taken: Rising sea levels and increasing storms are putting pressure on coasts, the warmer waters are forcing fish stocks to move to other oceanic regions and marine ecosystems, with all their species and habitats, will undergo drastic changes. This will lead to a shift in the life cycles and the ranges of certain species. The worst case scenario, however, is that species which cannot adapt to the changed conditions will become extinct. The global ocean acidification caused by CO2 enrichment has even more drastic consequences, since it attacks the limestone skeletons of marine species (e.g. corals, mussels and a great proportion of the plankton).

All of these actual scenarios have serious consequences for people whose livelihood depend on the oceans and those who live on the coasts. The threat to coasts from extreme weather events and the threat to fisheries as a livelihood are just two examples of the impacts of climate change.

Biodiversity strengthens the resilience of the oceans and coasts

The good news is that we can make our oceans more resilient to the impacts of climate change by conserving biodiversity. Conservation measures, the restoration of ecosystems, the ecosystem-based management of resources and the reduction of non-climatic stress factors can largely preserve the stability of ecosystems and the benefits they provide for humans – if global warming is limited by climate change mitigation measures. 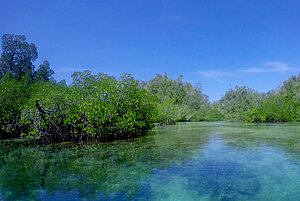 Special attention must be paid to ecosystems like coral reefs, mangrove forests and seagrass beds that are strongly affected by the consequences of climate change and other associated threats. These ecosystems perform important protective functions such as reducing storm flooding during extreme weather events, so they are crucial for the sustainable protection of densely populated coastal regions and the well-being of their inhabitants. Marine ecosystems such as seagrass beds also provide important ecosystem services such as carbon sequestration (“blue carbon”), improved water quality and, last but not least, healthy fish stocks as food.

In this way, IKI is making a valuable contribution to global marine and coastal protection

International Climate Initiative (IKI) supports a large number of marine and coastal protection projects. Since its launch in 2008, a total of 49 projects in partner countries have been funded with a total volume of around €262 million (status as of March 2020).

For example, funded projects such as the “Climate-Resilient Eastern Caribbean Marine Managed Areas Network (ECMMAN)”, supported the partner countries of IKI in establishing and effectively managing networked marine protected areas to conserve species and habitats and restore damaged habitats. Another IKI priority is the sustainable use of the oceans in cooperation with local populations, as implemented by the “LEAP – Locally Empowered Areal Protection in the West Indian Ocean” project. The concept of ecosystem-based adaptation (“EbA”) is also tied into this approach, since marine ecosystems provide important services for mankind and also can help to ensure that we are less affected by the impacts of climate change.

This is why IKI supports “nature based solutions” in the marine and coastal areas: they enhance the ability of the region’s inhabitants to adapt to the impacts of climate and are both efficient and economical. Specific measures such as the improved management, conservation and restoration of mangroves and coral reefs protect coastal zones from increasing storms and the consequences of rising sea levels. One example here is the “Using natural resources effectively – ecosystem-based adaptation in Indonesia’s coastal regions” project, which also combines mangrove protection with aquaculture. 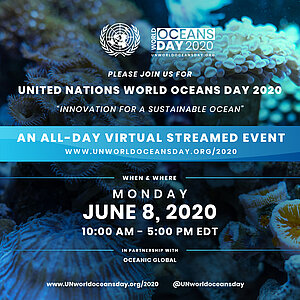 On no account must the resilience of the marine ecosystems be subjected to further pressure. This is why more intensive efforts are needed to mitigate the environmental impact of materials that originate from humans, such as nutrients, pollutants and plastic (waste) – and of course from our activities in the oceans.

In order to raise public awareness of the importance of the oceans and the need to protect them, the 1992 World Climate Summit in Rio de Janeiro, Brazil saw the inauguration of the World Oceans Day, which has since campaigned for the protection of the oceans every year. Due to the COVID 19 pandemic, this year’s World Oceans Day will take place in a major online event which is open to anyone who wishes to participate. An overview of all the associated virtual events is available on the UN World Oceans Day 2020 website.

Cruise ship and fishing boat against turtle and grouper

Building with Nature: scaling solutions to flood threats across Asia

IKI and the protection of the ocean

Caribbean Conservation You Can Dance To

Building with Nature in Indonesia

A Tool for Reef Recovery