IKI projects are well represented at the World Conservation Congress

IUCN’s World Conservation Congress in Hawai’i concluded with a set of commitments.

The International Union for Conservation of Nature (IUCN), which is the world’s largest nature conservation organisation, hosts the World Conservation Congress every four years. This year, the Congress was held in Hawai’i from 1-10 September and concluded with the adoption of the Hawai'i Commitments. In line with the Congress’s theme ‘Planet at the crossroads’, over 10,000 experts came together to discuss how to build a sustainable and more environmentally conscious future for the planet.

The Commitments are the outcome of recommendations and debates among participants from 192 countries, addressing major challenges such as ocean warming and the conservation and protection of rare species. Important recommendations include closing domestic markets for ivory, urgent protection of the high seas, the necessity of protecting primary forests, a ban on industrial activities in protected areas and an official IUCN guideline to promote the survival of biodiversity.

Governments and also numerous organisations came to Hawai’i and helped organise the Members' Assembly, along with forums, exhibitions, thematic pavilions and excursions. A number of projects that are part of the German Environment Ministry’s (BMUB) International Climate Initiative (IKI) also took part in the Congress’s 10-day programme. 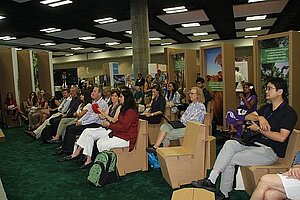 Two IKI projects — Ecosystems - Protection for Infrastructure and Communities and Ecosystem-Based Adaptation to Climate Change in the High Mountain Areas of Central Asia — each of which is receiving four million euros in BMUB funding, gave presentations at a workshop about their practical experience with and implementation of EbA approaches. Films about project implementation in Thailand and Chile were also shown as examples of ecosystem-based disaster risk management.

The IKI project entitled Protected Area Solutions for Biodiversity and Climate Change: Achieving Quality Elements of Aichi Target 11, which works on standardising criteria for protected areas, participated in several events dealing with the IUCN Green List. These took place in the Protected Planet pavilion and were concerned with developing methods for measuring progress towards objectives  that can be used to plan and manage protected areas more effectively and to record the results of protection activities. BMUB is funding this project through IKI with almost 3.5 million euros. The significance of protected areas was highlighted by US President Barack Obama’s announcement that Papahānaumokuākea Marine National Monument, north of Hawai’i, will be expanded, making it the world’s largest marine protected area.

In another workshop, participants from Latin America, Africa and Asia had the opportunity to discuss effective coastal and marine protection. The workshop on local action and global learning was organised by an IKI project: Blue Solutions — Implementation of the Strategic Plan of the Biodiversity Convention in Marine and Coastal Ecosystems. BMUB is providing 6.3 million euros for this project that aims to set up a ‘blue solutions’ network. The workshop‘s aim was to compare solutions to natural challenges in different regions and facilitate a South-South exchange of ideas and information.

Other IKI projects were also represented at the Congress and contributed in different ways to its success. IUCN’s Director General Inger Andersen stressed that: ‘Some of the world’s greatest minds and most dedicated professionals met here at the IUCN Congress to decide on the most urgent action needed to ensure the long-term survival of life on Earth and our planet’s ability to sustain us.’

During the Congress in Hawai’i, further pledges were made to support the Bonn Challenge, which was launched by the German Government. With the pledges recently announced by Malawi and Guatemala, the commitments to restore forests, made by governments, organisations and businesses, have now exceeded the 113 million hectare mark.

The next IUCN World Conservation Congress will take place in 2020.

A global standard for protected areas

Protection and sustainable use of the world’s oceans

Solutions for a Healthy Planet