Protection and sustainable use of the world’s oceans

Our ‘blue planet’: oceans and seas are the largest habitats on Earth – and the less protected.

On 8 June every year, the United Nations celebrates World Oceans Day, which seeks to raise awareness about the importance of oceans as a essential part of the biosphere for food security, health and the survival of all life, the conservation of biodiversity and climate change mitigation. The day is also an opportunity to highlight the acute threats to our oceans, which range from coral bleaching and huge volumes of marine and coastal plastic debris to the unresponsible and not sustainable handling of our valuable ocean resources. Oceans not only offer us food, resources and energy, and routes for transport, but are also worth protecting for their own sake.

This is also expressed in this years motto ‘The Ocean: Life and livelihoods’. Under this guiding idea it is discussed how the implementation of sustainable development goal 14 (SDG 14) – ‘Conserve and sustainably use the oceans, seas and marine resources for sustainable development’ – can be achieved by 2030. SDG 14 targets the sustainable management of coastal ecosystems and fishery stocks, the designation of marine protected areas (MPAs), and the reduction of pollution to our oceans and seas.

As part of the ongoing negotiations for a new agreement to protect global biodiversity, many countries have called for at least 30 percent of the world's seas and oceans to be protected by 2030. Today, just two percent of the ocean area is protected. This goal is supported by the Global Ocean Alliance (GOA), which Germany joined in May 2020. Since January 2021, Germany has also been a member of the High Ambition Coalition (HAC) for Nature and People, an alliance of ambitious members who support the goal of 30 percent protected areas by 2030 (30x30 by 2030) on land and in the ocean.

Although the world’s oceans form the basis for life for all of the planet’s organisms, our knowledge of them is still incomplete. In December 2017, the United Nations agreed on a Decade of Ocean Science 2021–2030, which started on 1 June this year. The aim is to promote the protection of the oceans and their sustainable development. This global ocean research effort focuses on SDG 14 so that this sustainable development goal can be successfully achieved during this Decade as part of Agenda 2030. Foreshadowing this year’s World Oceans Day and the Decade, Earth Day 2021 on 22 April had already drawn attention to the often overlooked deep knowledge of the oceans held by our ancestors, which they acquired from long experience, as well as ties to scientific research methodologies. IKI also promotes the discovery of synergistic benefits between indigenous and scientific knowledge about the protection and sustainable use of our oceans. 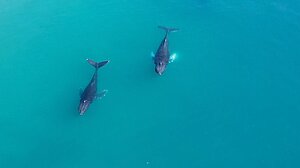 How IKI supports ocean and coastal protection around the world

The project ‘Support to indigenous peoples and community conserved areas and territories (ICCAs)’ is helping indigenous and local populations in 26 countries preserve their traditional habitats and protect biodiversity. Approaches include the use of small-scale project funds as well as capacity building in local communities, with the aim of managing and conserving protected areas. The overall objective here is to create a fairly managed network of protected areas (Aichi target 11). The living conditions of indigenous communities in these areas are also to be improved and safeguarded (Aichi target 14). Last but not least, traditional knowledge and uses should be recognised and addressed in state planning processes (Aichi target 18). Partner countries are also being given advice and assistance for implementing their protected area strategies.

The IKI project ‘Global Ocean Biodiversity Initiative (GOBI)’ is supporting signatories to the Convention on Biological Diversity (CBD) in their efforts to describe and identify ecologically or biologically significant marine areas (EBSAs) in the world’s oceans. GOBI is an international partnership of organisations who are committed to advancing the scientific basis for conserving biological diversity in the marine environment. GOBI partners assist the EBSA process by developing methods, generating new data and disseminating their latest scientific findings. GOBI is also helping countries to meet their national obligations, while cooperation between GOBI partners, CBD signatory states and intergovernmental organisations is driving the development of sustainable measures for marine management. 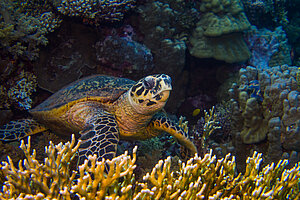 The ‘STRONG High Seas – Sustainable Use of the High Seas’ project is working in areas that are not subject to national jurisdiction (areas beyond national jurisdiction, ABNJ) in the south-east Atlantic and south-east Pacific. The project is supporting the development of cross-sectoral approaches to conserving biodiversity and ensuring its sustainable use. Building on regional interest and the dynamics of global policymaking, examples of good practice are being identified, and assistance is being given to regional and national organisations as they implement existing instruments and develop new approaches. With these aims in mind, the project is also promoting technical and scientific cooperation. In addition, potential regional governance approaches are being developed as part of a future international instrument based on the United Nations Convention on the Law of the Sea (UNCLOS), with examples of regional experience being incorporated into the global process with the ultimate goal of promoting ocean governance work at a number of discrete levels.

Implementing the Strategic Plan for the CBD in the field of conserving and restoring marine and coastal ecosystems is also addressed by the project 'Blue Solutions - Implementing the CBD Strategic Plan in the field of marine and coastal biodiversity‘. The project is supporting the further development of the online knowledge platform ‘PANORAMA – Solutions for a healthy planet’ and making strategic contributions to UN policy processes such as the Post-2020 Framework on Biodiversity and the SDGs. As part of the PANORAMA platform, Blue Solutions specifically promotes the exchange of best-practice examples for the sustainable use of marine biodiversity, with the aim of developing knowledge and resources in the 16 partner countries in Asia, Africa and Central/Latin America, and cooperating with networks such as Regional Seas. While documenting the results of these exchanges and sharing proven approaches, Blue Solutions also advises on the subsequent integration and implementation of the approaches developed into national and regional strategies as well as planning processes. As a result, partner countries receive support for implementing key action areas from the CBD, the Ocean and Climate Nexus, and SDG 14.

Healthy oceans are a key part of solutions to the critical state of biodiversity and climate. This year, important and far-reaching decisions must be taken to protect the systems that sustain life on our planet, not least at the fifteenth meeting of the Parties to the Convention on Biological Diversity (COP-15) in October. This event aims to adopt a strong 30x30 target, so as to ensure long-term, large-scale protection for marine areas. For when the oceans – our ‘blue planet’ – flourish, all other life on earth flourishes both in them and with them.

STRONG High Seas – Sustainable use of the High Seas

Marine Spatial Planning in a nutshell

The marine riches of the Maldives

Biodiversity is the basis for our existence

IKI and the protection of the ocean

Tafo Mihaavo, re-emergence of a national social movement in support of the customary governance of natural resources in Madagascar