IKI, together with partner organisations, held a successful virtual training on project preparation in Mexico.

Today, cities consume over two-thirds of the world’s energy and account for more than 70% of global CO2 emissions. In less than 30 years, two thirds of the population will be living in cities. By then, an expected 570 cities and over 800 million people will be at risk of flooding from rising seas and storm surges. Cities and their infrastructure are therefore decisively important when it comes to managing the challenges presented by climate change.

Many cities have developed plans to address this challenge. Yet, they often lack critical resources and capacity to advance climate resilient and low carbon infrastructure projects from an idea to a robust business case. Crucial support for the different stages of project preparation is lacking. As a result, urban climate-smart infrastructure projects are not realised at the scale and speed required.

In light of this situation, BMU is working together with the Cities Climate Finance Leadership Alliance (CCFLA) - a coalition of governments, financial institutions, climate funds, international organizations and think tanks to strengthen the project preparation capacities of municipalities. CCFLA is the only global multi-level and multi-stakeholder coalition with over 60 members devoted to mobilizing finance for city-level climate action at scale. CCFLA provides a platform to convene all relevant stakeholders, to exchange knowledge and to facilitate investment through analysis, learning and joint action.

Under the lead of FELICITY, an IKI financed project preparation facility implemented by GIZ in cooperation with the European Investment Bank (EIB), CCFLA held a virtual Project Preparation Readiness Training Programme in Mexico. The aim was to help project promoters and municipalities with the preparation of their low carbon and climate change resilient infrastructure projects. The free webinar series were held in Spanish to ensure more participation from project promoters across Latin America. Upon completion of the training, participants received a certification approved by CCFLA, GIZ, FELICITY and C40 Cities Finance Facility. The certification, lack of participation fees and language accessibility were all important incentives to participate for many project promoters as well as local and national government representatives. Although the training was designed according to the needs of municipalities in Mexico, the level of attendance exceeded all expectations. Thanks to the wide range of CCFLA’s network, representatives from 18 countries from the Latin American region joined.

79% of the Mexican population lives in cities and this number is expected to rise to 86% in the next 30 years. Increasing energy demand, long transport routes and the overburdened infrastructures in the ever-growing urban centers have drastic effects on the environment, climate impact on the environment, climate, health and security of supply. The air pollution in urban centers exceeds the limits set by the WHO.

Under its Nationally Determined Contributions (NDCs), Mexico aims to reduce its greenhouse gas emissions by 22% below 2005 levels by 2030. To achieve its climate goals, Mexico is focusing on decarbonizing cities. Yet the cities and municipalities often lack the institutional and human capacities to implement and prepare appropriate climate-relevant infrastructure projects. The national development bank, which is responsible for the municipalities, has little capacity to support project preparation. The cities have limited access to international climate finance sources due to the country’s insufficient creditworthiness.

The aim was to offer project developers a series of webinars and courses that provide an overview of the steps required in the formulation and submission of low carbon and climate change resilient investment projects. The trainings stimulated knowledge building and raised awareness on local development issues for low carbon financeable infrastructure projects, as well as access to networks, links to organizations, specialists and other resources. 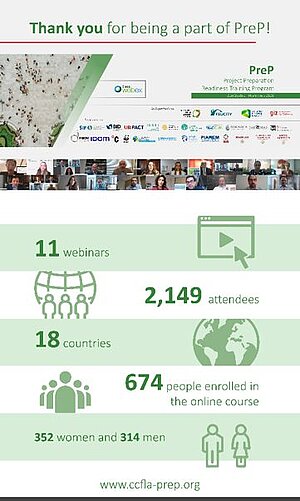 Between September and November 2020, 2149 attendees from 18 countries from the Latin-American region participated in 11 webinars.

Given the number of participants and the geographical scope, the organization of the trainings was highly cost effective. The development of the training and all marketing efforts were supported by several CCFLA members active in Mexico, for instance ICLEI, WWF, UN Habitat, C40 CFF, FMDV, and other important local partners like the National Development Bank and and the Mexican Finance Ministry).

While the live training sessions have ended, the full online course with webinar recordings is still available on the PreP website (all materials in Spanish).

Upcoming in May 2021: A virtual project preparation forum for Latin America

The project "Preparation Readiness Training Programme” was a pilot concept leading to the online forum for subnational project preparation practitioners in Mexico in May 2021. The forum will further promote exchanges between local stakeholders and contribute to a better understanding of local needs for preparing bankable climate resilient and low emission urban climate projects.

The forum is co-organised by the global networks of local and regional governments FMDV (Global Fund for Cities Development) and ICLEI (Local Governments for Sustainability). The ambition of CCFLA members is to replicate the forum in other world regions and remaster the online course based on lessons learnt.