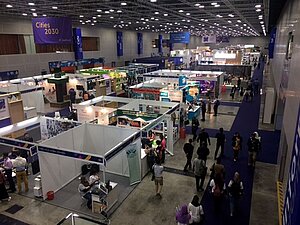 In her opening speech, the new Executive Director of UN-Habitat, Ms Maimunah Mohd Sharif, emphasised that urbanisation is one of the key issues tackled by the 2030 Agenda for Sustainable Development and that the priority now is to implement the New Urban Agenda. The aim of the New Urban Agenda is to ensure that in the future all humans can live in inclusive, safe, resilient and sustainable settlements.

Gunther Adler, State Secretary at the German Environment Ministry (BMUB), said during the opening of the German Pavilion, ‘Climate change and digital transformation are becoming increasingly important elements of urban development. That is why BMUB has firmly embedded urban development as a priority area in its International Climate Initiative. We are now supporting towns and cities in the area of digitalisation, among others.’ 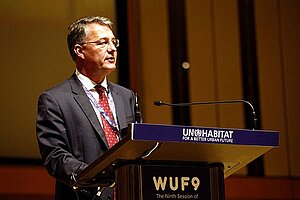 The ‘Sustainable Urban Development’ thematic portfolio was introduced as a cross-sectoral funding priority of Germany’s International Climate Initiative (IKI) to a broad public in a first for an urban development conference. The networking event organised by the IKI Programme Office attracted a lot of interest, with more than 100 participants attending. Since 2017, BMUB has been supporting sustainable urban development in combination with digital transformation. 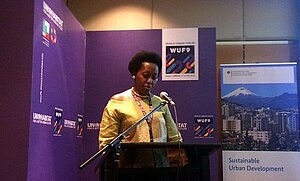 With more than 500 events, WUF9 participants discussed the latest trends in urban development. From an IKI perspective, key areas include integrated approaches to water supply, gender, air quality, waste and buildings. Participants also learnt about newly developed mitigation and adaptation monitoring tools and instruments for implementing the Sustainable Development Goals (SDGs) in municipalities. A lot of interest was also generated by the events of the new Global Covenant of Mayors for Climate & Energy, a merger of the Compact of Mayors and the European Commission’s Covenant of Mayors which was launched shortly after the Paris Climate Summit. More than 7,500 cities and local governments in 121 countries have now signed up to the Covenant, to set goals for reducing CO2 emissions and submit regular progress reports. 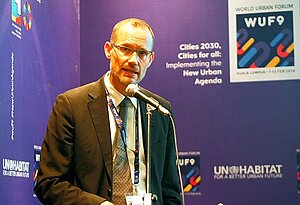 Germany’s ‘Smart City Charter’, also introduced at the World Urban Forum by State Secretary Adler, was drawn up by around 70 experts from academia, civil society, municipalities, federal states and national government as part of the ‘Smart Cities’ national dialogue platform. The Charter sets out the ‘Smart Cities’ understanding of values and objectives, assesses opportunities and risks, and lays down guidelines and recommendations for action. 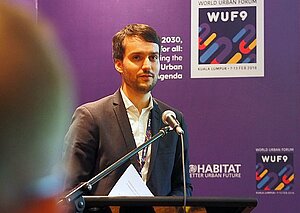 This year’s WUF9 is the first gathering since the international community met at ‘HABITAT III’, the United Nations Conference on Housing and Sustainable Urban Development, in Quito in October 2016. During HABITAT III, participants agreed on the ‘New Urban Agenda’ as a new global standard for urban development.

Agenda of the IKI Networking Event at the WUF 9 (PDF, 536KB)

Hanoi: The battle against smog

A Global Dialogue on Decarbonising Transport