Transjakarta achieves its ambitious goal of moving 1 million passengers a day with technical and policy assistance from ITDP.

Transjakarta is now the longest bus rapid transit (BRT) system in the world and one of the first in Asia. Its success goes against the all-too-common narrative that change is impossible in the Global South’s megacities. Thanks to the innovative approaches guided by Institute for Transportation and Development Policy (ITDP) Indonesia, new transportation systems and high levels of public approval. The one-million-passenger mark is a significant achievement and demonstrates the momentum of Transjakarta and possible successful change in the transport sector in megacities. Today, Medan and Semarang have modeled their BRT plans to those of Jakarta, as Transjakarta has become a leader for transit in the region. How did this happen?

Boost for Transjakarta with support from IKI: Integration with other public transport modes

This trend shifted in 2004, with the implementation of Transjakarta. The well-designed and expansive system began providing transit for thousands of people every day but remained far from fulfilling its potential. There were maintenance issues, inconsistent operations and suboptimal service. Neither drivers nor law enforcement honored the physically segregated bus lane, and it was a major challenge to keep cars out of it. After years of advocacy by the ITDP Indonesia for open service, Transjakarta became a formal part of the municipal transport structure, and a direct service provider in 2016. Over the next few years, with support from the International Climate Initiative (IKI) project “Reducing Emissions through Integration and Optimization of Public Transport in Jakarta”, ITDP has worked with Transjakarta through provision of technical and policy assistance, leading to the increase in ridership.

Many factors contributed to the growing ridership of Transjakarta but the most significant is its integration with other public transport modes, which has allowed it to both take over routes and serve people farther away. An example is its integration with the microbuses (angkots). Angkots are cooperative buses that provide service to residential areas or more remote parts of Jakarta. 20 percent of Transjakarta’s ridership comes from angkots. The integration has led to the improvements in service among transit operators. 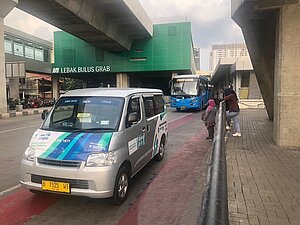 The small and medium bus operators integrated with Transjakarta follow the Transjakarta Minimum Service Standards (MSS), which prohibits smoking on board, and requires that drivers to follow speed regulations and stop at designated locations, among other enforced rules. These rules are enforced through fines and are successful in limiting or diminishing such problematic behavior. Transjakarta plans to equip each vehicle with air conditioning and special designated areas for elderly, expectant women, and disabled people as well as spaces for women to sit to avoid harassment.

Currently, Transjakarta is working to integrate with Jakarta’s MRT (metro) and other bus services to further expand its coverage of the region and provide better service to its passengers. It has importantly remained low cost, with the price of each ticket at 3500 Rp (roughly $.30 USD) including transfers, irrespective of distance or zone. Many of the important features added to Transjakarta’s system like having dedicated bus lanes and off-board fare purchasing have increased efficiency and reliability. Furthermore, by enforcing specific stops Transjakarta has created a cultural shift for riders, and drivers, who were accustomed to boarding or picking up passengers at any moment along the route. There is also a mobile application that is available free to all passengers, giving them access to departure and arrival times.

Currently, Transjakarta is the longest BRT in the world - and a good example of how an efficient public transport system can improve the quality of life in megacities and at the same time contribute to climate protection.

Reducing emissions through integration and optimization of public transport in Indonesia

Interview: How to become a sustainable transport heaven