In the "Climate Change Network", young people in Costa Rica are committed to climate action.

24-year-old Jimena Araya from Cartago, Costa Rica has always had an interest in environmental issues. Since she was a child, she has been passionate about caring for flora and fauna and an expert thanks to Animal Planet. So much so, that she even thought about becoming a veterinarian.

However, Jimena soon realized that her individual actions were not enough to fight the climate and environmental crisis. She needed to find like-minded people with whom she could implement actions that would have an impact on a larger scale. As a result, in 2020, she joined Costa Rica’s Youth and Climate Change Network (RJCC).

The network includes approximately 40 people between the ages of 18 and 35, offering them a space to develop and carry out projects that increase resilience against climate change on a local and regional level, promote decarbonising key sectors, and encourage the protection of ecosystems and people.

The RJCC was established after the PreCOP25 – which was held in Costa Rica – with the aim of integrating climate action efforts of the country's youth, promoting experience and knowledge exchange, and carrying out projects that promote the resilient, decarbonized, and just development. Costa Rica’s youth has also been highly active in the past few years: in 2021 they co-organized and participated in the Local Youth Conference (LCOY) led by the official youth constituency of the United Nations Framework Convention on Climate Change (YOUNGO). At COP26, 12 young Costa Ricans shared their valuable experiences and perspectives in several panels and side events.

“The participation of youth such as Jimena  in decision-making, planning and implementing climate actions is key to contribute in a more robust way to our country’s climate action”, confirms Annelice Corrales, who is part of the RJCC’s Commission for Capacity Development.

In December 2021, about 50 young people got together for a two-day workshop with the aim of developing a roadmap for the 2022 national Youth for Climate Action meeting. During the preparatory meet-up, participants identified synergies, established new alliances and commitments between the country’s youth organizations, and determined objectives, roles, and a comprehensive work plan for the upcoming annual gathering.

“Ever since the Covid-19 pandemic began, articulating this type of spaces has become a challenge. I think that in the past two years we haven’t had the opportunity to meet with so many representatives of such diverse organisations, all working towards the same purpose,” says Jimena. 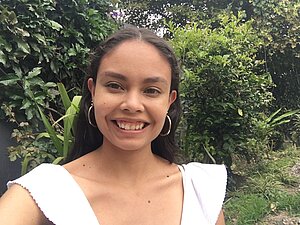 The planning workshop was led by the RJCC and the youth movement Green Wolf Costa Rica and included representatives from multiple youth-led organisations focussed on climate and environmental matters. Participants came from all over the country, including coastal and rural areas, as well as indigenous territories.
Among the attendants were Epsy Campbell, Costa Rica’s vice-president,  Franklin Paniagua, the vice minister for Environment and Energy and Patricia Portela de Souza, a representative of the United Nations Children's Fund.

The path to decarbonisation belongs to the youth

As determined within its enhanced NDC, Costa Rica has committed to empowering vulnerable groups, including youth, with the aim of developing and implementing long-term and just climate actions. This will be carried out by improving education on climate change, just transition, and green growth, strengthening capacities regarding mitigation and adaptation, promoting and facilitating their involvement within the national and international climate dialogue, as well as developing an action plan for integrating youth in climate action.

GIZ, on behalf of the IKI, will expand the support offered so far, accompanying further planning and implementation of the 2022 youth meeting, providing technical support for the development of its strategic plan for 2022-2026, and offering a series of capacity building formats.

Green Recovery in Costa Rica – working on a “3D Economy”