Costa Rica underlines its strong commitment to climate and environmental issues at COP26 in Glasgow, Scotland.

Costa Rica underlined its strong commitment to climate and environmental issues at the recent 26 Climate Change Conference of Parties (COP26) in Glasgow, Scotland.

The country, whose size of 51,100 km2 corresponds to only 14% of Germany, is characterized by its high climate and environmental ambition.

For the 2021 climate negotiations, the country had set its sights on maintaining the 1.5-degree-Celsus target of the Paris Agreement through affirmative actions, such as data- and science-based decision-making, nature-based solutions as an engine of mitigation, adaptation and economic reactivation, access to climate finance for developing countries, among others.

At the COP26, 11 governments co-chaired by Costa Rica and Denmark launched the Beyond Oil and Gas (BOGA) initiative. This historic alliance calls on the world to end the exploitation and production of fossil fuels to mitigate the negative effects of climate change. By way of an international community of practice, BOGA will support governments in delivering their commitment to a managed and just transition.

“BOGA’s main objective is to establish an end date for oil and gas exploration and production that is aligned with Paris Agreement objectives”,

said Andrea Meza, Costa Rica’s Minister of Environment and Energy, and one of the main promoters of the first-of-its-kind alliance. 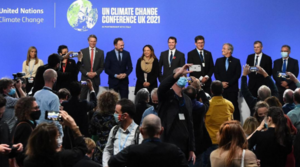 The country is already making important headway in decarbonising its main emission source – the transport sector – and connecting it to its clean energy matrix with the support of the IKI-project Mitigation actions in the transport sector in Costa Rica. Currently, a proposal for a NAMA (Nationally Appropriate Mitigation Action) Support Project focussed on promoting the use of green hydrogen in different sectors is being prepared.

In January 2021, Costa Rica set an important milestone with the launch of the High Ambition Coalition for Nature and People (HAC), presented with co-chairs France and the United Kingdom. HAC is an intergovernmental group of 70 countries that aims to preserve at least 30% of terrestrial and marine ecosystems by 2030, halt the loss of species, and protect vital ecosystems. Scientific evidence has shown that achieving the 30x30 target would help reverse adverse ecological impacts and the risk of species extinction, while increasing resilience and adaptation to climate change.

In another alliance, Costa Rica joined forces with Panama, Ecuador and Colombia to link their respective marine reserves off the Pacific coast and create the Eastern Tropical Pacific Marine Corridor. This will create an interconnected fishing-free ecological area of more than 500,000 km² in one of the most important migratory routes for sea turtles, whales, sharks and rays.

“We are committed to advancing in the protection of four islands in the Eastern Tropical Pacific, which are unique sites of incalculable value. We are agreeing not only to advance individual national efforts, but also our cross-border vision because these species migrate through each of these islands”, explained Meza.

A highly discussed topic during COP26 was the need for funding, especially among developing nations, to promote necessary investments in mitigation and adaptation measures. Costa Rica shared best practices of the IKI project Microfinance for Ecosystem-Based Adaptation (MEbA). MEbA developed financing products such as micro-credits for smallholder farmers in Latin America, who are affected by the lack of climate financing at local levels.

Costa Rica aims to scale up the successful results within the IKI project Scaling-up Ecosystem-based adaptation (EbA) measures in rural Latin America. To achieve this, the project develops and implements innovative and cost-effective EbA approaches in different ecosystems. It ensures long-term impact through, among other things, the development of innovative financial instruments and products, improved governance and knowledge exchange.

In 2020, Costa Rica carried out a highly participatory update and review process of its Nationally Determined Contribution (NDC). As a result, the country has positioned itself as an example to other nations on how to include civil society, particularly vulnerable groups such as women, youth and indigenous people, in the national climate dialogue and in construction processes of political frameworks.

Additionally, Costa Rica’s representatives shared their experiences on how to encourage local governments to implement mitigation and adaptation actions by way of the greenhouse gas certification programme “Programa País Carbono Neutralidad”. The country is supported in further strengthening the cooperation with the aforementioned stakeholders by the IKI project ACCION Clima III – NDC implementation and regional knowledge exchange.

Within the context of international climate diplomacy, significant progress was made at COP26, and the conference’s results signal the path to follow. Costa Rica, as well as the other parties, now face the challenging task to act appropriately and further develop its transformation towards climate-neutral economies and societies. The international cooperation will be there to support them in their endeavour.

For more information on Costa Rica's participation in COP26, see this presentation (in Spanish; external link to LinkedIn).

Mitigation actions in the transport sector in Costa Rica

Using microcredit to tackle a mega-problem in Colombia

Towards Resilient Infrastructure in Costa Rica with Andrea Meza Murillo

Green Recovery in Costa Rica – working on a “3D Economy”

Is your city made for walking?

Towards Resilient Infrastructure in Costa Rica

Climate-intelligent agriculture engagement by the IKI

How to make infrastructure more resilient towards climate change