Firsthand experience from Kenya and Vietnam on the use of GHG emissions data to improve the policy-making processes.

Vietnam and Kenya are miles apart, both literally and figuratively. Situated on different continents, the two countries are home to distinct social, cultural, and natural environments. But climate change is global. It respects neither national nor continental boundaries. At a time when the world is coming together to address climate change, Vietnam and Kenya are joined by their commitment to reduce greenhouse gas (GHG) emissions.

In Vietnam, urbanisation and economic growth have led to a sharp increase in motor transport. There are over 46 million registered motorbikes in a country of 93 million people and the number is rising. As a result, GHG emissions are set to triple from 32.2 Million tonnes (Mt) in 2014 to 89.1 Mt in 2030 in a Business-As-Usual (BAU) scenario. Kenya also faces an increasing demand for motor transport, with total emissions of 11.5 Mt in 2015 expected to rise sharply by 2030.

To prevent these alarming scenarios from becoming reality, the Governments of both countries have been developing GHG reduction policies as part of their climate change action plans; however, the absence of evidence-based data has proved a major obstacle.

"Government agencies can only set effective reduction policies if they can accurately calculate energy consumption and GHG emissions, and monitor the results of reduction initiatives," said Mr. Vu Hai Luu, an official at Vietnam's Ministry of Transport.

Since graduating in mechanical engineering 25 years ago, Mr. Luu has been working to reduce pollution and emissions in the transport sector. Currently a member of the Ministry of Transport's GHG Inventory Working Group, Mr. Luu works closely with the Advancing Transport Climate Strategies (TraCS) project, which is funded by the German Federal Ministry for the Environment, Nature Conservation and Nuclear Safety (BMU), and implemented by GIZ in Vietnam and Kenya. The objective of the project is to support the systematic recording and reduction of emissions in the countries' respective transport sectors to facilitate implementation of their Nationally Determined Contributions to the Paris Agreement.

Mr. Martin Eshiwani, Director of Road and Rail Transport Services at the Kenyan State Department of Transport, has a lot in common with Mr. Luu. They both recognize the necessity for clean transport, and as Coordinator of the Climate Change Coordination Unit for the transport sector, Mr. Eshiwani is also a key collaborator of the TraCS project. 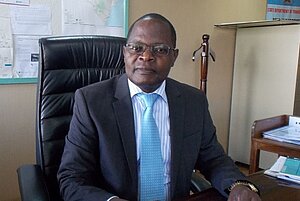 For Mr. Eshiwani, the TraCS project has made a significant impact: "The Climate Change Coordination Unit is now more informed and better placed to report its GHG emissions," he said. "As a sector, we have managed to set up specific targets to reduce emissions." For example, based on calculations made by the project, efficiency improvements in truck freight transport have the potential to reduce emissions by 0.91 Mt in 2030 compared to a BAU scenario. Kenya Railways has also calculated that a recent shift of freight from road to rail between Mombasa and Nairobi is equivalent to taking 700 trucks off the road each day.

In Vietnam, the TraCS project has been working with the Ministry of Transport's GHG Inventory Working Group to quantify transport emissions and identify promising mitigation policies. The group identified the biggest data gaps in transport data and requested support for data collection from all sub-sectors including road, waterway, railway and aviation. As a result, the Ministry reviewed its data collection system and collected number of road vehicles, average fuel consumption of passenger cars and make a sample of more than 2,200 odometer readings, providing key data on average distances travelled by road vehicles. This data, along with data from other sources of emissions, was then fed into scenario calculations that were discussed and verified during a one-year stakeholder consultation process. The scenario calculations have enabled the identification of several promising GHG reduction policies, including fuel economy and emission standards; a shift from private to public transport; a shift of freight transport from road to waterways and railways; the promotion of bioethanol (E5/ E10); and the promotion of electric cars, buses and motorbikes.

As the results supported by TraCS demonstrate, with the implementation of key mitigation policies the transport sector in Vietnam has the potential to reduce emissions by up to 20 Mt (20%) by 2030 compared to a BAU scenario with international support. This potential will inform the formulation of the transport, climate change and green growth action plan for the period 2021-2030. According to Mr. Luu, the data generated through collaboration with the TraCS project is essential: "The data quantifies each mitigation action and provides evidence-based data for the Ministry's' Climate Change Action Plan," he said. 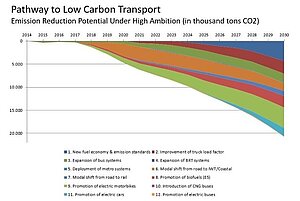 The generation of reliable data is not just a matter of policy. The data indicates what is achievable; it enables Governments to set realistic and challenging goals for the reduction of GHG emissions. It shows the way ahead.

This point is echoed by Mr. Eshiwani: "The issue of transport and climate change has been highlighted through the TraCS project. Most significantly, workshops and study tours have provided an understanding of what can be done to reduce GHG emissions."

Although the availability of reliable data has improved the policy-making process in both countries, it is just a first step. The TraCs project will continue to support the Kenyan State Department of Transport through to 2021, shifting its focus to more specific policy advice, e.g. for fostering uptake of electric mobility and institutionalizing data collection and reporting. In Vietnam, the scenario calculations will be used to develop the transport climate action plan and as evidence for the country's Nationally Determined Contribution update. As Kenya and Vietnam continue their efforts to address climate change in the coming years, data will play an increasingly important role in shaping effective transport policy.

Supporting climate strategies in countries where motorisation is rapidly increasing

Discover the Tracker of Climate Strategies for Transport

Transport and climate meeting back to back

Viet Nam readies itself to deal with gridlock