Worldwide protection for wetlands and peatlands

To mark the annual World Wetlands Day, the Secretariat of the international Ramsar Convention on Wetlands is calling for wetlands action for people and nature. The Federal Environment and Consumer Protection Ministry (BMUV) supports wetlands and peatlands worldwide to curb the growing climate crisis and loss of biodiversity.

Federal Environment Minister Steffi Lemke explained: “Wetlands are among the most versatile and at the same time most endangered ecosystems on the planet. Lakes and rivers, peatlands and swamps, coral reefs and mangroves are worth protecting not only as habitat for rare endangered animal and plant species. They also provide vital ecosystem services for people. Intact wetlands supply drinking water and food, improve water quality and protect us from natural disasters like floods. As long-term carbon stores, they make a key contribution to natural climate solutions. These fragile ecosystems therefore urgently require our protection so that we can tackle the climate crisis and worldwide biodiversity loss.” 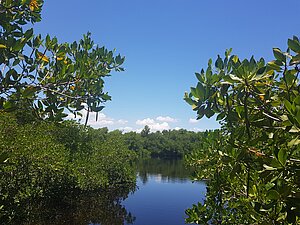 At national level, Germany is actively committed to preserving wetlands; currently, 35 sites covering a total of 869,000 hectares across its national territory are designated as wetlands of international importance. Internationally, Germany advocates preserving, restoring, connecting and sustainably managing wetlands. This is why the Federal Environment and Consumer Protection Ministry (BMUV) currently funds 11 related projects with a total of 52 million euros under the International Climate Initiative (IKI).

In 2022, the BMUV will launch four additional projects under the IKI with a total funding volume of 32 million euros. The first of these projects, which started on 1 January is a regional project with the aim of safeguarding crucial biodiversity, carbon and water stores in the peatlands of the Congo Basin.

The peatlands of the Cuvette Centrale, which were first mapped in 2017 and are located in the Republic of the Congo and the Democratic Republic of the Congo, are the largest interconnected tropical peatland complex of the world, covering an estimated 145,000 km2 (and storing approximately 30 gigatonnes of carbon). They are home to an impressive wealth of biodiversity. The highest density of Western lowland gorillas can be found here along with other species such as bonobos, chimpanzees, forest elephants and bird species. There are a variety of protected areas here, among them several Ramsar sites like the Ngiri-Tumba-Maindombe site (the second largest wetland in the world at 6.7 million hectares), which is located in the transboundary area around Lake Télé and Lake Tumba. The site includes the largest continental freshwater body in Africa, making it one of the most important wetlands in Africa and one of the most important freshwater bodies in the world. 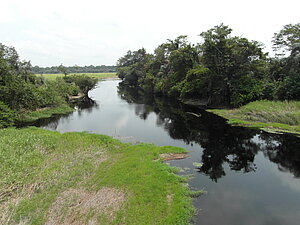 To preserve this habitat, the United Nations Environment Programme (UNEP) is working together with partners to develop and pilot action plans for endangered species over a six-year period. Beyond that, a management plan to preserve the water resources is envisaged that will include a monitoring system for the peatlands. The IKI has made 15 million euros available for these measures alone.

Sand: Mitigating the impacts of climate change in the Mekong Delta by engaging the private and public sectors in the sand industry

„Wetlands action for people and nature“

COP26 | Protecting the Congo peatlands for climate mitigation and adaptation

Citizen journalism for the Mekong